London covers 600 square miles and has a population of 8.6 million, but only its oldest part, just one square mile in size, is called the City of London. That is where the Romans founded the city of Londinium shortly after they arrived in 43AD. Today, the City of London – or simply “the City” – is the centre of London’s finance industry. The City is where you find the Bank of England, the London Stock Exchange, the investment banks, insurance companies and financial markets. It combines the most modern headquarters buildings with Roman remains and medieval churches, and it is great to explore on foot. Here are 10 facts about the City:

1. Geography plays a key role in the success of the City of London. Unlike New York, Tokyo or Hong Kong, the City’s business day overlaps those of all the world’s financial centres. The City can trade with the Eastern Hemisphere in the morning and the Western Hemisphere in the afternoon, allowing its dealers to trade in all major markets in one day.

2. Though it is the oldest part of London, the City doesn’t look very old. That is because it has been almost entirely destroyed and rebuilt twice: once in the Great Fire of London in 1666, and then again after being bombed in the second World War. It is fascinating to track down the structures which survived the Great Fire and World War 2. 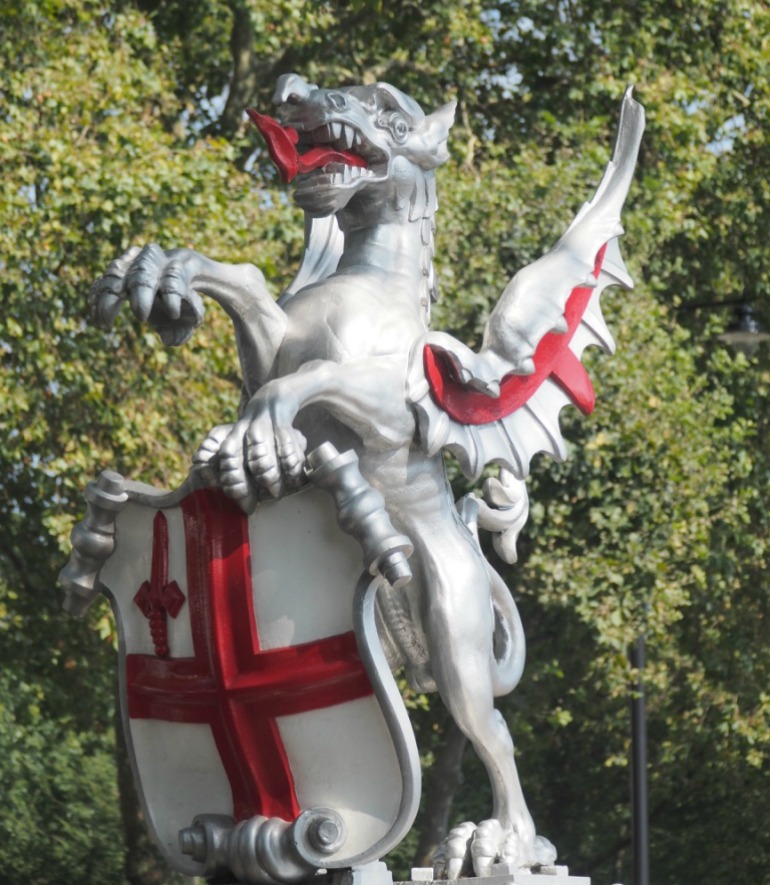 The boundaries for the City of London is marked with dragons. Photo Credit: ©Ursula Petula Barzey.

3. Everywhere you look there are new buildings being constructed in the City of London, many by the world’s leading architects. About a quarter of the buildings are replaced every 25 years. 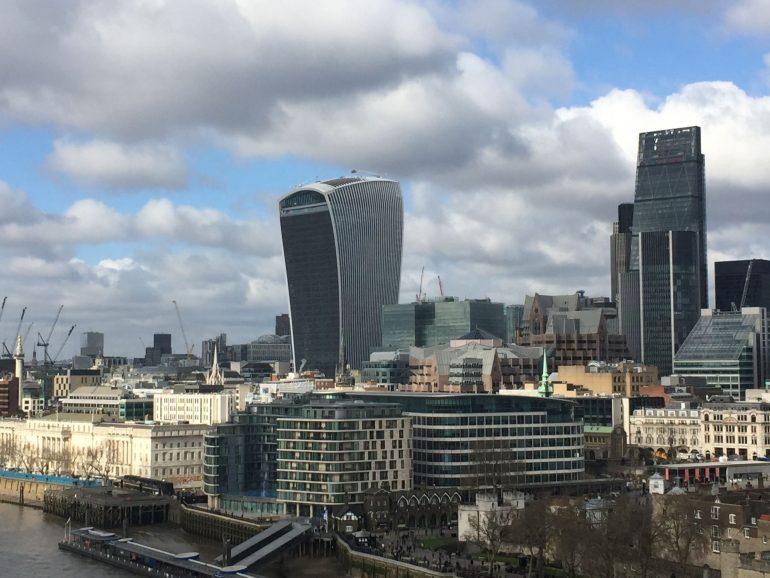 A view of the City of London from the Thames River. In the forefront is 20 Fenchurch Street know as the Walkie Talkie Building. In the background is the The Leadenhall Building known as “The Cheesegrater” because of its distinctive wedge shape. Photo Credit: ©Nigel Rundstrom.

5. The Bank of England was devised by a Scot, William Patterson, and its first Governor was a Frenchman, John Houblon. It is the central bank for the whole of the United Kingdom, and yet it is called the Bank of England.

6. There are over 500 banks resident in the City of London, most of them foreign. The City has more Japanese banks than Tokyo and more American banks than Manhattan. 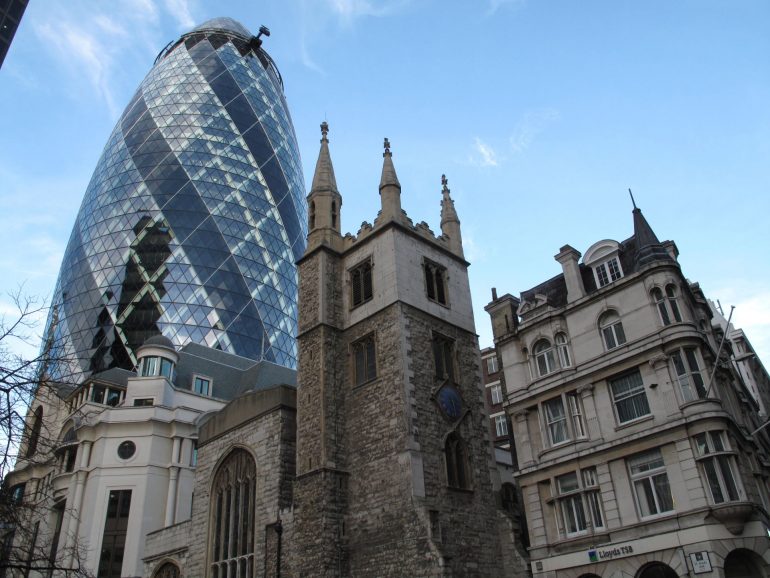 In the City of London new skyscraper buildings spring up next to old landmarks. Here, 30 St Mary Axe known as the The Gherkin which has been built next to St. Mary Axe a mediaeval church. Photo Credit: ©Nigel Rundstrom.

8. Some of the City’s most famous institutions started out in coffee houses at the end of the 17th century. Jonathan’s and Garraway’s coffee houses in Exchange Alley saw the first buying and selling of company stocks. Edward Lloyd’s coffee house was where ships and their cargoes could be insured, leading to the foundation of Lloyds of London.

9. City life used to be dominated by the Livery Companies, trade guilds who trained craftsmen, set standards and controlled the practice of trades. Over one hundred still exist today even though the trades they represented have vanished from the City of London. Many still occupy grand “livery halls” and survive as social and charitable institutions.

After a cosmopolitan upbringing I settled in London in 1975. I couldn’t imagine living anywhere else and it is a privilege to share London’s unique combination of history, art, culture and contemporary attractions with visitors.

In addition, 32 years in the IT industry have given me a good understanding of…

One response to “Top 10 Facts About The City Of London”

People entering the interior of Saint Pancras can now see a new LED sculpture by Tracey Emin, a twenty-metre message in bright pink saying “I want my time with you.”  Emin is a notorious and controversial modern British artist, whose most famous work is probably her bed, which she put on display at the Tate Gallery surrounded by empty vodka bottles and used condoms.