There are half a million people of Russian descent in London, three quarters from the form Union of Soviet Socialist Republics (USSR). Amongst them are the actors Helen Mirren, David Suchet, and Peter Ustinov, writer Stephen Poliakoff, the former politician Nick Clegg and the recently deceased opera director and television personality Jonathan Miller.

Many Russians in London are descended from those who were unable or unwilling to return to Russia after the Second World War. You can hardly blame them for this reluctance as Joseph Vissarionovich Stalin was not in a forgiving mood after the Russians lost around twenty-five million people in the war. The British government returned thousands of Cossacks to Russia after the war and most of them were sent straight to the gulags of Siberia.

One of the most famous figures to come to England from Russia was Tsar Peter the Great, who came to learn about shipbuilding in 1698 and spent three months in Deptford. He was supposed to be ‘incognito’ but that must have been difficult as he was six foot eight inches tall and had a huge entourage including his bodyguards who were all as tall as him. There is a monument to this larger than life figure at Deptford and a portrait of him at Kensington Palace by Godfrey Kneller which was presented to William of Orange by Tsar Peter. 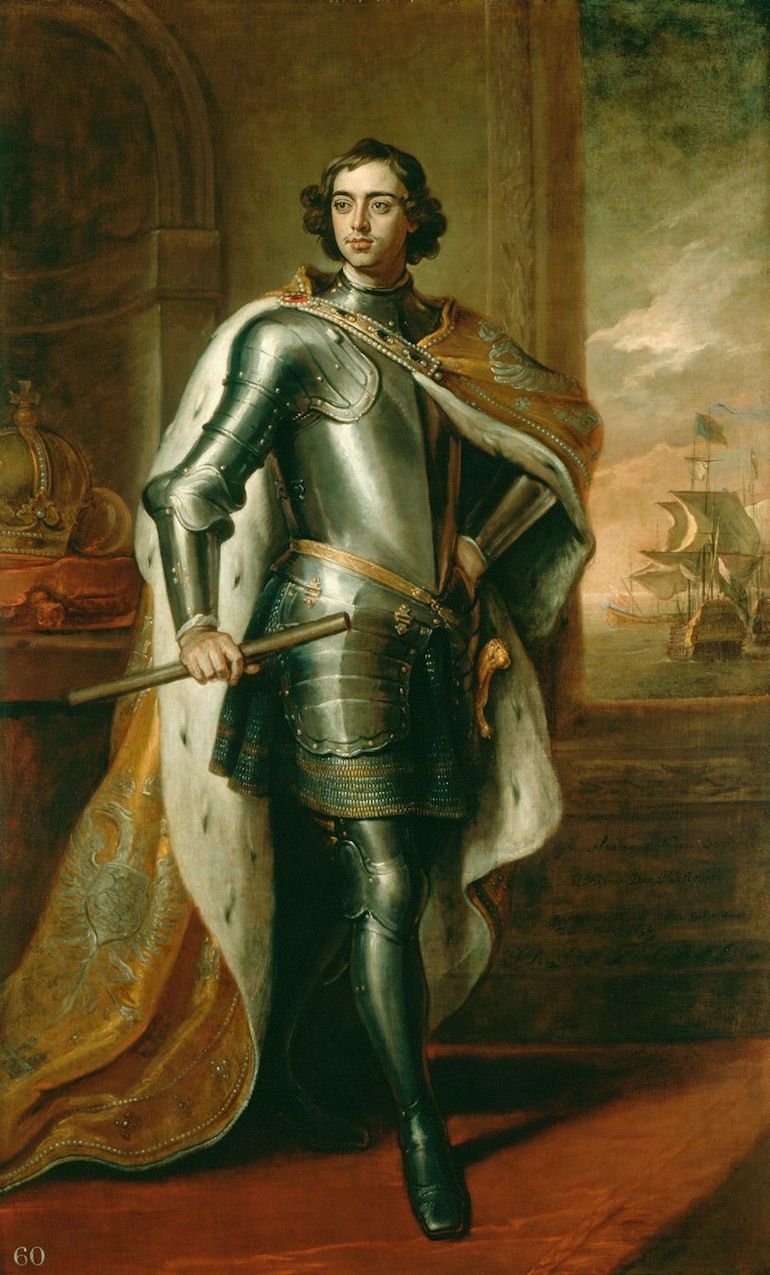 The other famous resident in London associated with Russia was at the other end of the social and political scale. Karl Marx arrived here with his wife Jenny von Westphalen in 1850 and remained here until his death in 1883. His grave in Highgate Cemetery is often visited by admirers and disciplines of the Marxist philosophy, which inspired communism and the Russian Revolution of 1917 when the Tsars were overthrown. Vladimir Putin, a former officer in the KGB, the communist secret police in Russia, is now the President of Russia.

Karl Marx was always short of money to support his large family and relied on the generosity of his friend Frederich Engels. He wrote his famous work Das Kapital in the Reading Room of the British Museum where he walked to and from his cramped apartment in Soho. Here he could work for free and in comfort with access to a large supply of scholarly works. A portrait of Karl Marx can be seen holding the book entitled DK in the Soho mural by Peter Blake, who also created the famous Beatles album cover for Sergeant Pepper’s Lonely Hearts Club Band. 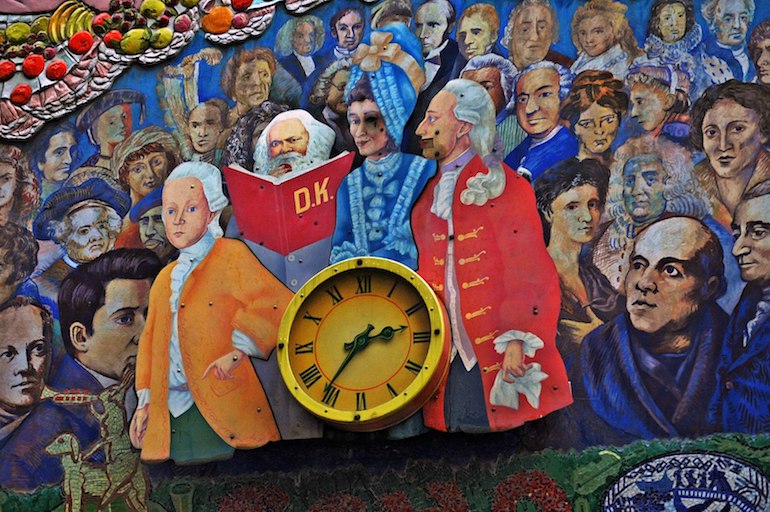 Karl Marx’s message is kept alive through the Karl Mark Memorial Library in Clerkenwell built in honour of London’s most famous revolutionary thinker. Lenin, the man behind the 1917 uprising, and Leon Trotsky, who was one of its prime movers but who was later assassinated by Stalin’s killers, also lived in London.

Today many people want to know about Russian oligarchs and the Sunday Times Rich List is crowded with Russian billionaires who took advantage of the opportunities available for amassing wealth after the collapse of communism. These include the owners of Chelsea and Arsenal football clubs, Roman Abramovich and Alisander Usmanov; Mikhail Fridman, who owns the magnificent Athlon House in Highgate (often called Witanhurst) and Yelena Baturina, the richest woman amongst them, who comes 158th on the list but still has more money than the Queen. The £225 million yacht belonging to one of these billionaires Andrei Melnichenko was seen moored next to HMS Belfast by Tower Bridge in September 2016.

Although the very wealthy dominate the headlines they make up only one percent of the Russians in London. It is not always a safe haven as there have been at least six suspicious deaths of Russians in London in recent years. Amongst them were the journalist Alexander Litvinenko, who was poisoned with plutonium in 2006, and Abrahamovich’s former friend Boris Berezovsky, who was found hanged at his Surrey mansion in 2013.

Other famous Russians in London include the first man in space Yuri Gagarin, who was received at Buckingham Palace, and the ballerina Anna Pavlova, who lived for many years in Golders Green. She not only had the Pavlova dessert named after her but her golden statue can be seen on top of the Victoria Palace Theatre where the Hamilton musical is currently playing. We also have the work of artists such as Naum Gabo and Boris Anrep in London, Anrep’s mosaics decorating the floor of the National Gallery of Art in Trafalgar Square, founded by insurance underwriter John Julius Angerstein who was born in St Petersburg. 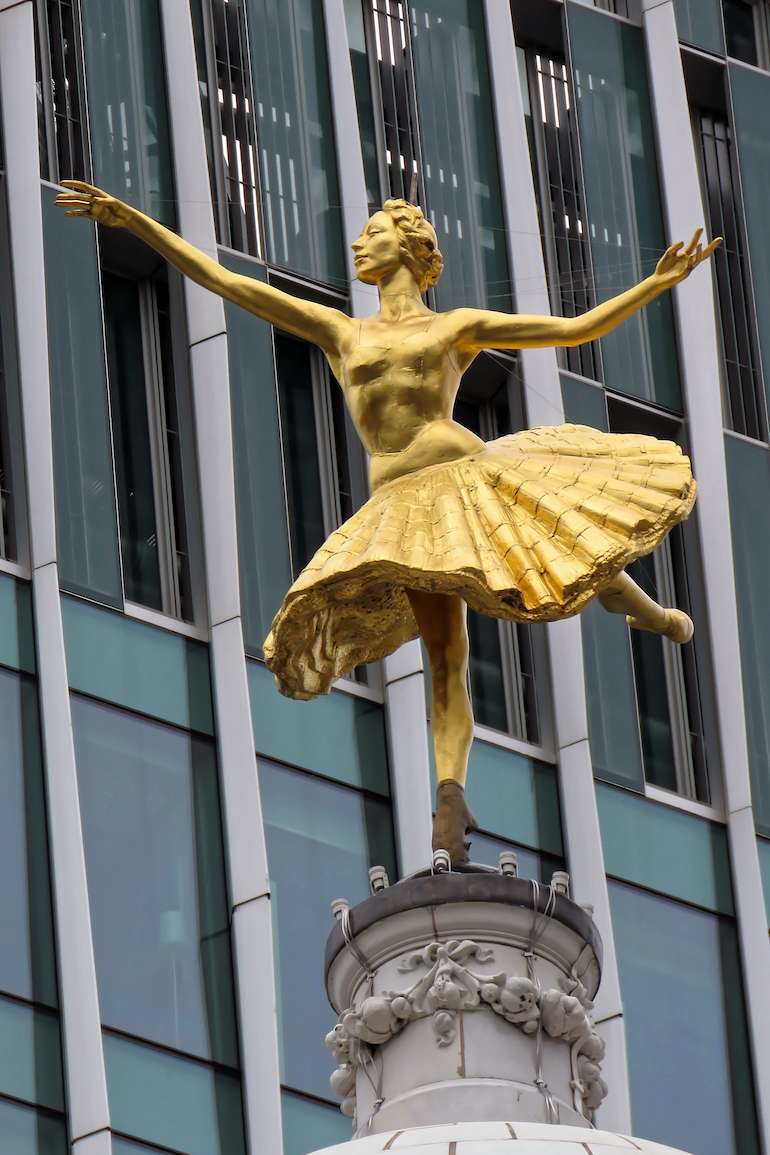 Statue of Anna Pavlova on the cupola dome of Victoria Palace Theatre in London. Photo Credit: © Acabashi via Wikimedia Commons.

Blue Badge Tourist Guides in London are expected to know their history and knowledge of the major sites associated with popular singers is now also a part of our job. For example, sites connected with the iconic singer David Bowie in London have joined the famous pedestrian crossing used by the Beatles in Abbey Road as places to visit.

The Long Footsteps Of Charles De Gaulle In London

Charles de Gaulle, a junior minister in a collapsing government and a relatively junior general in an army that was ceasing to exist, landed at Heston airport after a gruelling and perilous flight from Bordeaux, on Monday 17 June 1940. Few of his British hosts knew who he was, Winston Churchill being the exception. During his visits to France, Churchill had immediately noticed “a young, energetic general called de Gaulle.” `(In Gabriel Le Bomin’s biopic of de Gaulle, which features the early days of the two men’s relationship, Churchill is brilliantly played by Tim Hudson – who is also a London Blue Badge Guide!)