According to Chambers dictionary, a quack is ‘someone who claims, and practises under the pretence of having, knowledge and skill that he or she does not possess.’ A quack doctor, then, is a fraud. 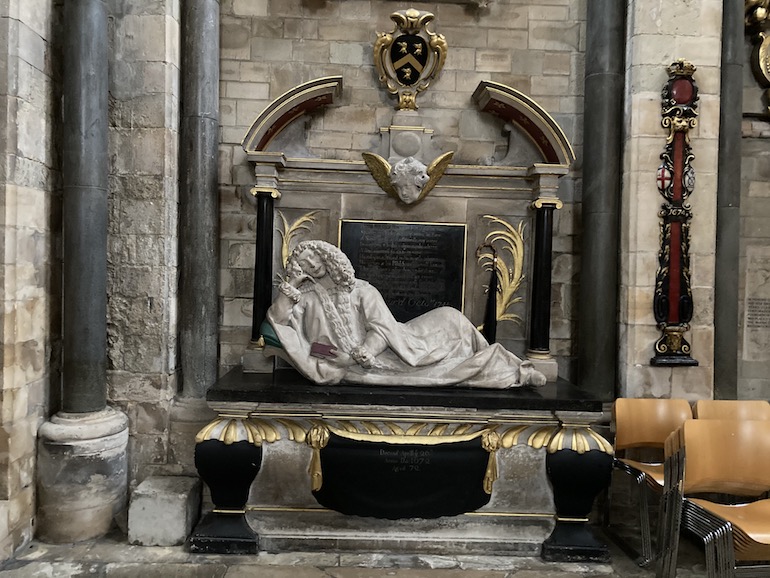 One of the best-known quacks, if only because of his elaborate tomb in Southwark Cathedral, which he himself paid for, is Lionel Lockyer 1600-1672. He designed the memorial, including the coat of arms – a chevron and three boar’s heads – of which the College of Heralds has no record, and even wrote the rhyming epitaph on the wall behind.

In other words, men’s mouths rehearse his eulogies because they swallowed his pills and Lockyer’s pill is what made him famous and rich. In 1660, aged 60, he claimed to have trapped the sun’s rays in a pill, the Pilula Radiis Solis Extracta to give it its Latin name, which sold not only throughout London but also Great Britain and the fledgling colonies across the Atlantic. It meant that at his death, he was able to give £50 (about £5,000 today) to each of two hundred poor families in Southwark, a gold mourning ring worth seven shillings to each of two hundred friends and £1 to anyone who turned up at his funeral ‘for their pains’ which certainly ensured a large crowd. It is unclear whether his reference to pains was meant in a medical sense. He was a doctor after all. This was on top of the cost of the memorial which was not cheap. He was generous, flamboyant and conceited.

Lockyer had lived in Southwark for twelve years before he died. There is no record of where he lived before that. His first trade was tailoring but it seems he always had a hankering for medicine because he came into money after marrying a rich widow and spent much of it on learning the science of alchemy from a doctor in Germany.  Although he had no official qualifications and there is no record of him at the Royal College of Physicians, he did acquire a ‘bishop’s licence’ to practise locally in Southwark. The licence allowed Lockyer to sell his pills in the City of London.

In the 1660s, Lockyer published an 18-page advertisement which lists the outlets. First, there was the hospital in Southwark, St Thomas’ through Mrs Mary Whitehouse who was convinced of the pill’s restorative powers. St Thomas’ would move to Waterloo in 1868, but originally it was at London Bridge and the Old Operating Theatre and herb garret are housed in the tower now of what was St Thomas’ Chapel. In the 1720s the bookseller Thomas Guy founded Guy’s Hospital next to St Thomas’s and although Lockyer was long dead by then, his pills were still available and the matron at Guy’s, Mrs Wallis, was also convinced of their healing qualities.

In Bishopsgate, Mrs Dell of Slipper Court, Mrs Rogers in Skinner Street and Mrs Colby in Wormwood Street could hardly get enough of Lockyer’s pills to satisfy their customers. In the Royal Exchange, newly built after the Great Fire in 1666, Mrs Randall had a shop opposite Mr Hazard’s Lottery Office (hazard – get it?) where she sold not only the sunlight pill but also the ‘anodyne necklace’ an infamous quack remedy made of henbane roots and worn by children to ward off illness. 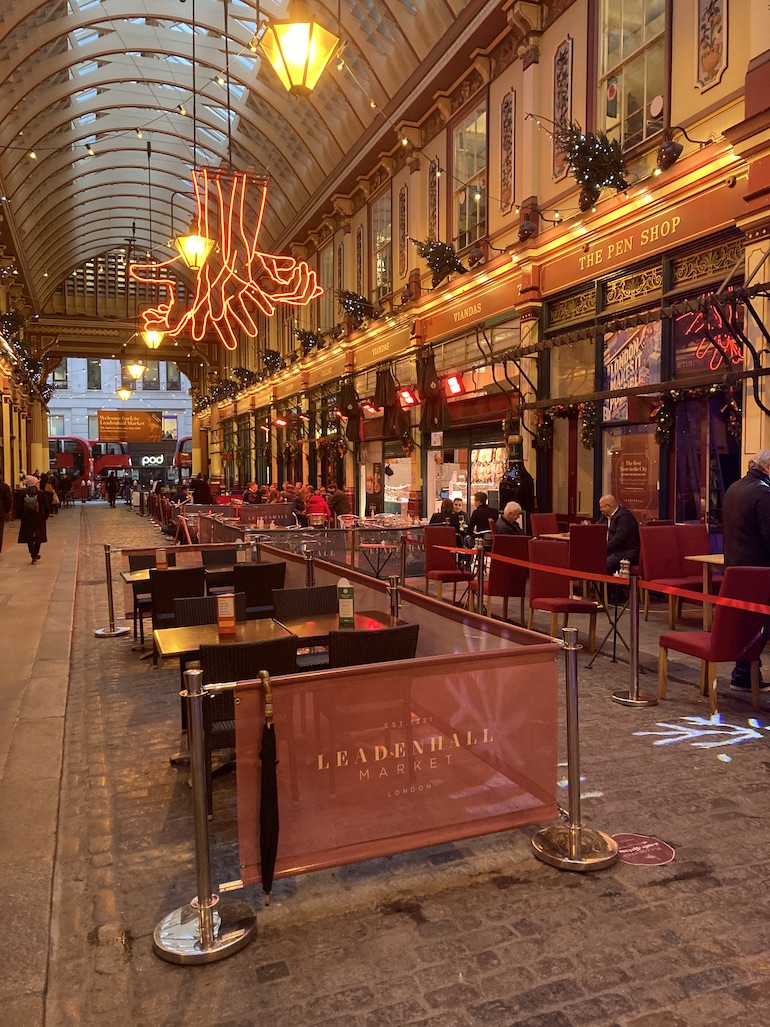 Lockyer acquired the herbs for his remedies from Mr Thomas Fygge in Leadenhall Market. Fygge is one of two people mentioned in the advertisement who knew the recipe of the sunlight pill and would continue to manufacture it after Lockyer’s death. The other is Lockyer’s nephew Mr John Watts in Southwark to whom he bequeaths in his will his ‘books, manuscripts, vessels, bowls, glasses, instruments and other materials belonging to his art and practice as a physician’. In fact, Fygge died shortly after Lockyer in 1672 so that Watts became a sole trader in the ‘solar preparation’ from the appropriately named Racquet Court off Fleet Street. 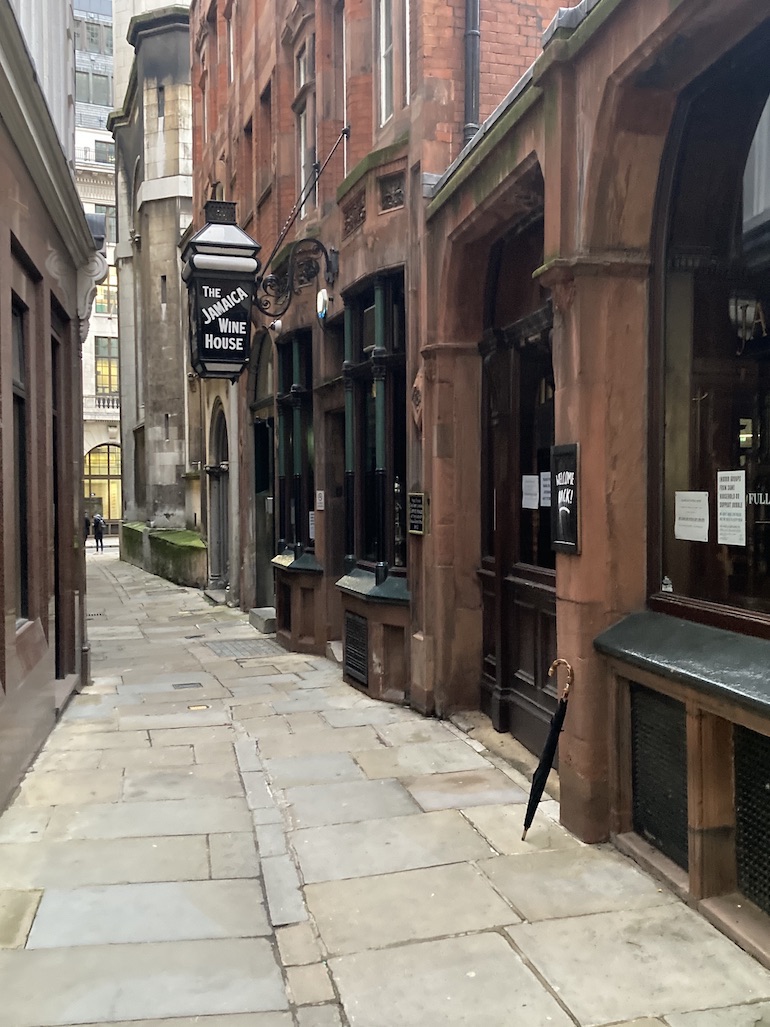 Lockyer distributed his pills to the New World through the Jamaica Inn in St Michael’s Alley off Cornhill. Many of his customers wrote testimonies. From Jamaica, Mr John Corral of James River wrote in 1681, ‘I judge the Pills the best ever brought to Jamaica. I could write a whole quire of paper about their virtues, but that would be tedious’. In the same year, Mr William Frampton in New York stated that everybody was talking about Lockyer’s pills and asked for a dozen boxes to be sent.

Satisfied patients at home also wrote in praise of the pill which seemed to be especially effective against worms. John Pitts of London Bridge wrote that his wife had almost despaired of a cure for the gnawing pain in her bowel, but that after taking Lockyer’s pills she voided 500 worms in five hours. Again, Mrs Dixon of Dead Man’s Place in Southwark took six doses of the sunlight pill and rid herself of a single worm seven yards long. And then a Mr J Brown who was resident at the Tower wrote to say that his teeth were falling out, his gums ‘bowed like a horse’s back’ and that he swelled from head to foot, but ‘the manner of working of your pills is so various that I believe none can predict how they will work three times in a row: sometimes by vomit, sometimes by stool, sometimes by both and sometimes by neither but constant spitting and ever concluding by a good blast of the wind. The truth is, they will operate on whatever I find most annoying.’

Vomiting and bowel evacuation were the desired responses to medical treatments by all doctors in the early seventeenth century. Medics then believed ill health resulted from an imbalance in the four humours or fluids in the body, blood, phlegm, yellow bile and black bile, and that healing was possible by purging the excess humour. This was why bloodletting was popular and cures from the action of leeches. The fact that Lockyer’s pill made patients either throw up or run for the toilet was evidence of its tremendous effectiveness.

Even King Charles the Second was impressed. ‘My success,’ Lockyer wrote in his advert, ‘occasioned his sacred majesty to lay his command upon me to shew some part of the process of this great preparation in his presence and before Prince Rupert and several peers of the realm which I accordingly did to their great satisfaction.’ We do not hear whether the King bought a box.

Lockyer’s directions for taking the pills are comprehensive. He says they can be taken by anyone, strong or weak, old or young, infants or newborn. As for the dosage, patients may take three, four or five at a time. This should be increased by two pills a day until cured. If taken in the morning they should be followed by a sleep, if the evening, then on a light supper and not a full stomach. They can be taken any time of year and washed down with water, gruel, broth or beer.

Lockyer was a quack doctor in an age of quack doctors, who prospered because this was also the age of the plague against which everyone was equally powerless, quacks and bona fide physicians alike. One might say Lockyer made a killing in the 1665 outbreak when his useless remedy was at least cheaper than the useless remedies prescribed by the profession. We know the price of Lockyer’s pills from Mrs Elizabeth Munns of Sheffield who had a ‘cancerated’ breast. The physicians had given up on her she wrote, but for ten shillings [about £50 today] she bought a box of Lockyer’s pills and ‘later had a child which now feeds from my breast’. Meanwhile, the doctors’ prices were exorbitant. Mr Robert Havercamp wrote, ‘I got a wound in my thigh twenty-two years ago and was at death’s door. The surgeons wanted to charge me forty pounds [£4,000] for an operation. The price startled me more than the remedy. So I made use of your pills only.’ 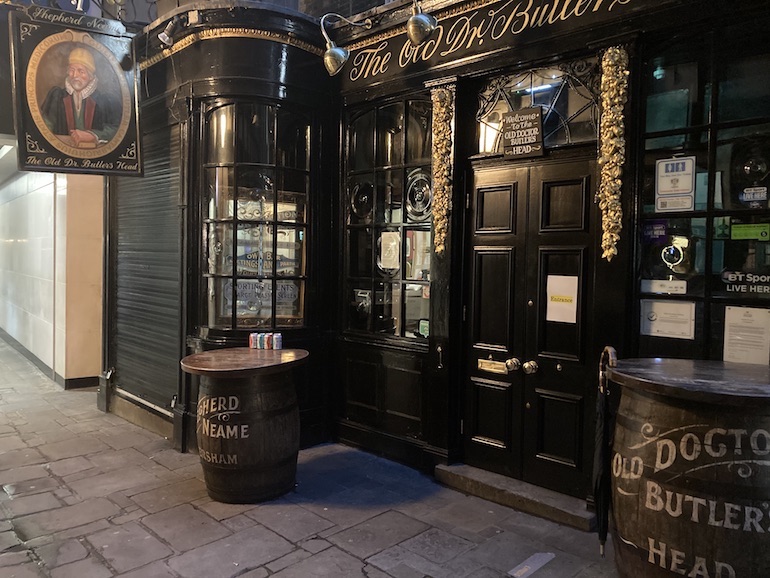 The Olde Dr Butler’s Head commemorates another quack in an age of them. Photo Credit: © Richard Jones.

Lockyer was certainly not the only quack around though he was probably the most successful. On our journey through the city we find ourselves in Great Bell Alley and outside a pub, the Old Dr Butler’s Head which was named after William Butler of Clare Hall, Cambridge who rose to be the physician to King James I and was famous for his many eccentric remedies. He fired pistols near patients to cure epilepsy, had an ice-cold treatment against the plague and once revived a clergyman, who had taken an overdose of opium while writing a sermon, by slaughtering a cow and placing the inert reverend’s body inside the carcase. Apparently, he recovered.

Increasingly adventurous sea travel during the 17th century saw the importation of plant-based drugs, such as ipecacuanha from Brazil, a remedy against dysentery, and Jesuit’s Bark from the western Andes, effective against malaria. Scientific research and experiment improved and the quack doctor’s days when he might have considered himself the equal of the qualified professionals were numbered. Our walk concludes at the Barber-Surgeons’ herb garden where we take a well-earned rest among the exotic and local vegetation. Sunlight pill anyone? 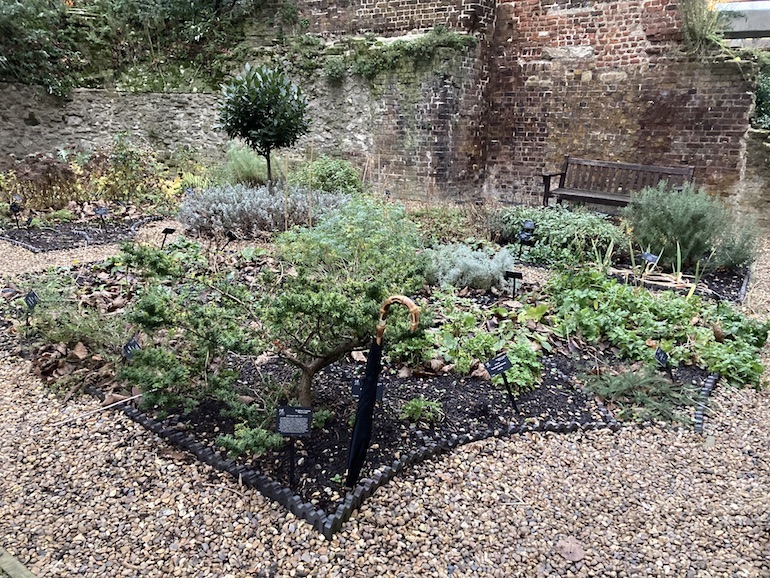 Hallo everyone! My name is Rick
and here’s my schedule for the coming week.
As you can see I’m free all day on Tuesday
and on Sunday, Thursday morning and
the afternoon on Friday, Saturday
and Monday. At your service. Get in touch!

Mondays 10am The Changing of the Guard  I…

Rising elegantly above the River Thames halfway between the Tower of London and Big Ben is the Temple. Inner and Middle Temples, and beyond them Lincoln’s and Gray’s Inns make up the four Inns of Court. Here are time-forgotten havens of shady courtyards, scented gardens, and spooky gas-lit passageways. For hundreds of years, lawyers in their chambers and courtrooms have beavered away, crafting and refining the Common Law.

Explore the refined squares of Bloomsbury – home to radicals and pioneers Bloomsbury in London is a sort of urban oasis, sandwiched in…