The Huguenots Of Wandsworth, South London

The indelible mark left by the Huguenot community and their development of the silk weaving industry is the stuff of legend. Their skills and entrepreneurial drive led them to settle across the south of England and in America. In the aftermath of the revocation of the Edict of Nantes in 1685, the small trickle arriving in Britain turned into a steady flow and, by the beginning of the eighteenth century, Huguenots made up five per cent of London’s population. Some of these refugee families headed to a small village, now a suburb of South London called Wandsworth.

In the early eighteenth century, Wandsworth’s market gardens supplied Covent Garden and other markets. Corn mills along the River Wandle had fed the Royal Household for centuries and the Wandle was Europe’s hardest working river, peppered with mills, factories and warehouses. Huguenots were pivotal in this process. 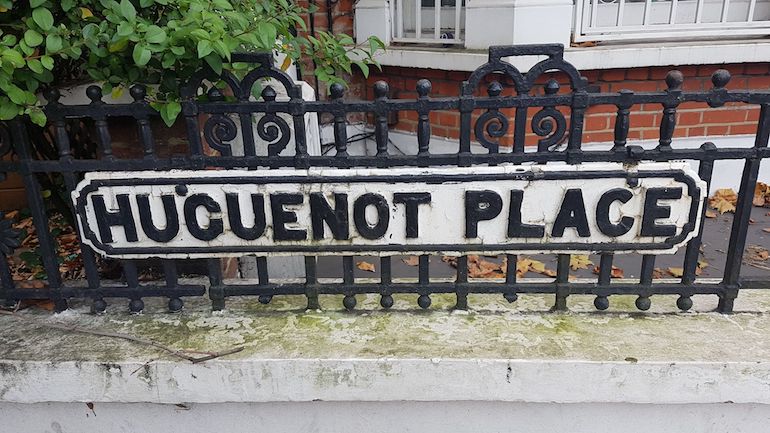 The Huguenots were attracted to Wandsworth by an already existing community of French and Dutch emigres. Finding a settled French-speaking community would have been of importance for the Huguenots, giving them the prospect of worshipping in their own language. The first refugees to arrive were employed by existing local industries including, frying pan making, calico printing, market gardening and ‘Wandsworth Scarlet’, a red textile dye made from imported Brazilian wood.

Eventually, the Wandsworth Huguenots became renowned for their hat-making skills, having imported their own formula of felting, the process of removing furs from the skin. This involved the use of mercury which could lead to erethism, most commonly referred to as ‘mad hatter’s disease’ or the ‘hatter’s shakes’, a neurological disease which caused tremors, violent spasm, and could lead to madness and death.

Besides the Ram Quarter, the former Ram Brewery, there is little that survives of Wandsworth’s past industries or the Huguenots. However, there are a few clues reminding us of their legacy. Opposite Wandsworth All Saints Church on the High Street is a narrow alleyway that leads to Chapel Yard. This secluded and quiet spot close to the busy A3 is dominated by the charming Clore Building. This Victorian Romanesque extravaganza reminds me of Milan’s fifth-century basilicas and is now the premises for the National Opera Studio (worth visiting to watch live rehearsals). 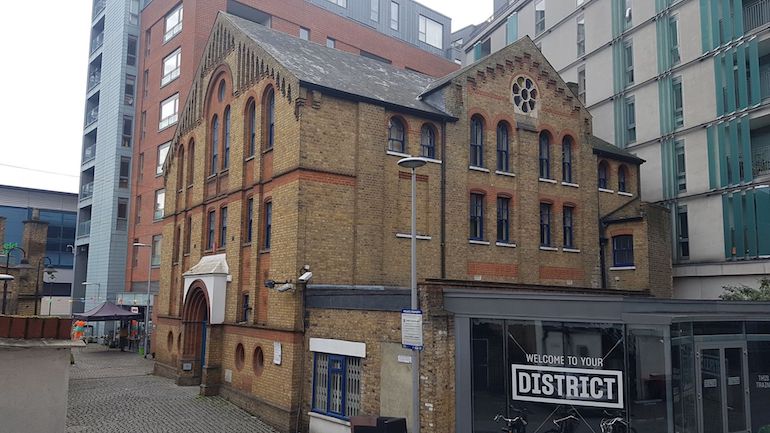 On its facade are a number of plaques, whose content should be taken with a pinch of salt. One makes a claim about a Presbyterian chapel on this spot since 1572 (this would have been illegal in the sixteenth century) while another says that a Dutch congregation worshipped on this spot. Whilst these claims are overblown, Wandsworth’s industry did attract immigrants and dissenting groups in large numbers, eventually making the village a hotbed of non-conformism.

The census of 1903 records that 49% of the population were members of the Church of England, 6% were Roman Catholic and the remaining 46% belonged to dissenting groups: Baptists, Quakers, Congregationalists, Methodists, Unitarians, Presbyterians. 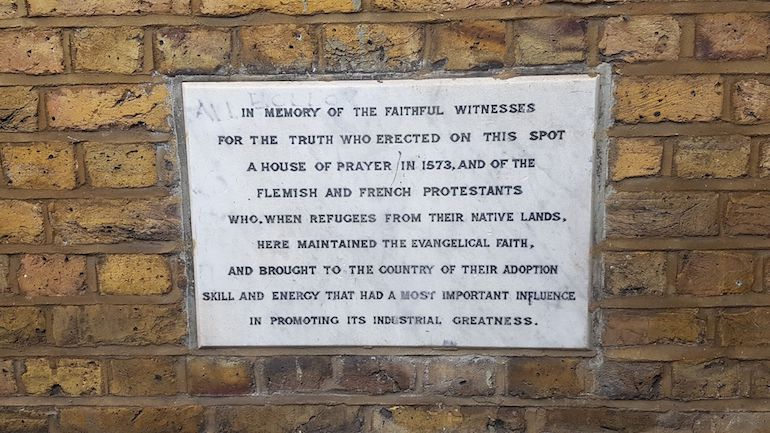 The history of non-conformists’ tolerance by the authorities is a complex one, but the Wandsworth Huguenots were allowed to worship in their own language, ensuring they would not attract natives to their congregation. A property deed from the 1680s records how the Huguenots leased a barn in Chapel Yard which they converted formally into the ‘French Church’ in 1713 and which operated until 1787.

Head east along the High Street to the beautiful but overlooked Municipal Suite, a Portland stone-faced Art Deco building which is Wandsworth’s Town Hall. Alongside the building are friezes representing the parishes of the former Borough of Wandsworth. Just above the Borough’s Coat of Arms is a Huguenot couple in period dress, flanked by soldiers returning from the front and a horned Viking. 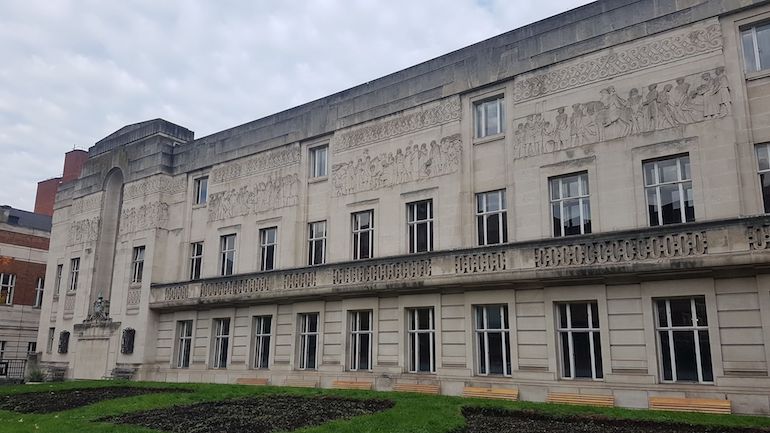 View of Wandsworth Town Hall with friezes on side of the building. Photo Credit: © Christopher Hayden.

Heading towards Southwark is Book House, former HQ of the Wandsworth Board of Works. Behind is Mount Nod Cemetery, also known as the French Cemetery, used for Huguenot burials. It operated from the 1680s until 1854 when many of the metropolitan burial grounds were closed by parliament. The cemetery has been refurbished, monuments repaired, meandering paths relaid and vegetation tidied up.

There are plans to open the garden as a communal space. This serene place of repose indicates a thriving well off community, with many of the tombs elegantly faced with stone. These are typically plain memorials with no Christian iconography, some adorned by memento mori, such as crossbones with skulls and hourglasses.

The importance of the Wandsworth Huguenot community was remembered long after most had left or were assimilated. Opposite Huguenot Place facing the East Hill side of the cemetery is a memorial stone erected in 1911 after lobbying by George William Tarrant, priest of the local Unitarian Church. Throughout his stay in Wandsworth he wrote a number of sermons praising Huguenots fleeing persecution in pursuit of freedom to follow their Protestant faith. He reminded his congregation of how much Wandsworth had gained from Huguenot enterprise and sacrifice. 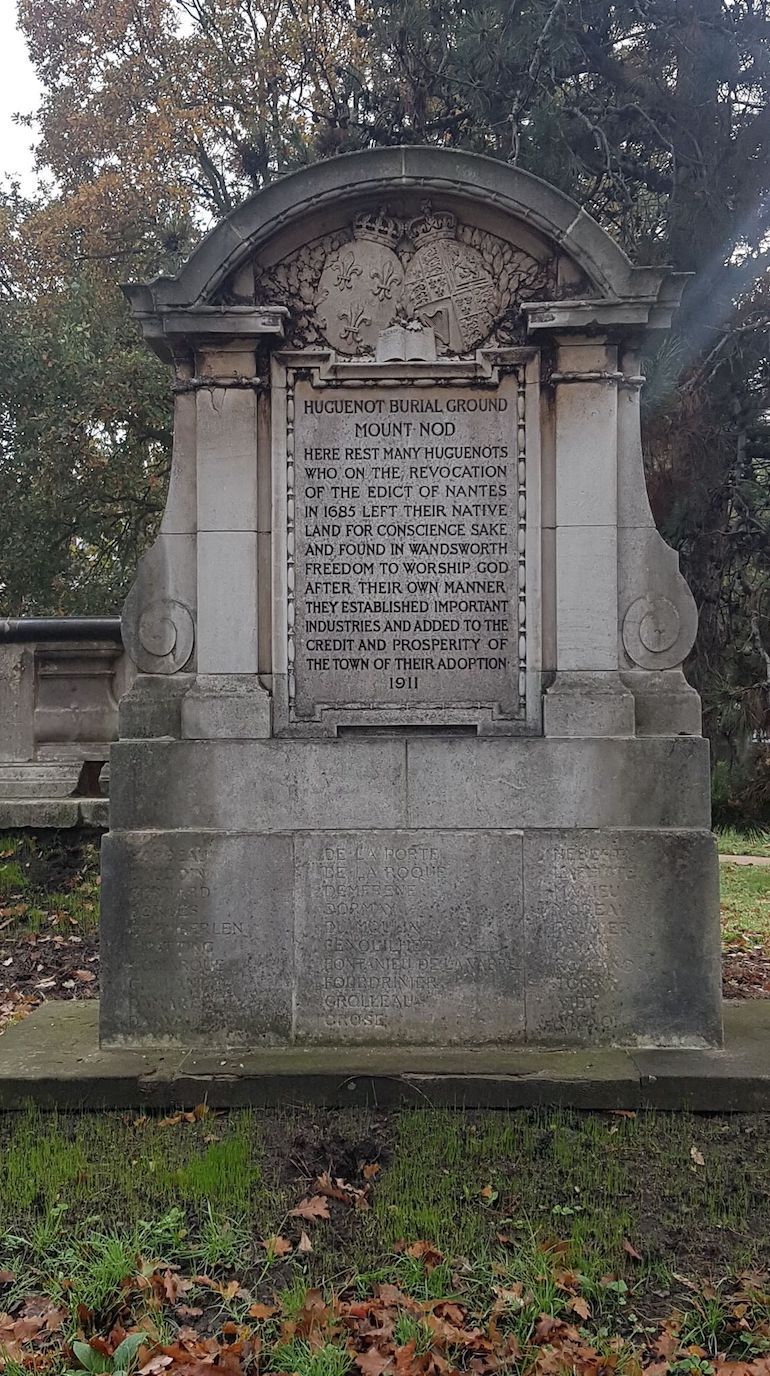 The first Harry Potter book was published in 1997 with a hardback print run of just 500, each of which is now worth £40-50,000. Since then the seven Harry Potter books have sold nearly 500 million copies and the eight films based on these books have grossed £6.5 billion, making J K Rowling the world’s richest author with a fortune of around £600 million.