The unveiling was lead by Tim Laurence, chair of the Blue Plaque Trust, Alan Judd, historian who wrote the biography ‘The Quest For C’, and Cummings’ grand-niece, who recalled Uncle Manny.

The actual cord pulling was performed by Alex Younger, current Chief of SIS, 16th in the post, who later talked at some length in the Gladstone Library on the top floor. He praised modern spies and described the sheer joy you feel when you realise you’ve got one over on those who mean you harm. 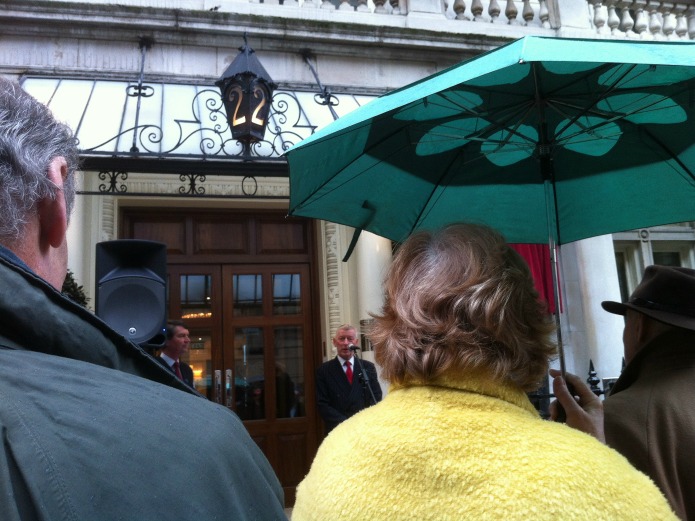 The historian Alan Judd speaking on the mic, with Tim Laurence, chair of the Blue Plaque Trust, standing near the loud speaker. Photo: ©Simon Rodway.

He described today’s inhabitants of Vauxhall Cross as the very best of modern Britain, patriots to a man and woman, who can think what they like and wear what they like. He compared that with Cummings’ day when ‘C’ had to give his female employees permission to marry.

Commander Cummings was a middle-aged reservist living on a house boat when he was asked to create a secret service, and eventually he ran a Europe-wide network during World War One, La Dame Blanche, involving 800 agents. He was the first to write and type in green ink – an old naval custom apparently.

Cummings has appeared in Reilly Ace of Spies, played by Norman Rodway, and in Ashenden, Somerset Maughan’s semi-autobiographical account of his own years as a WW1 agent, when Cummings was played by Jos Ackland. 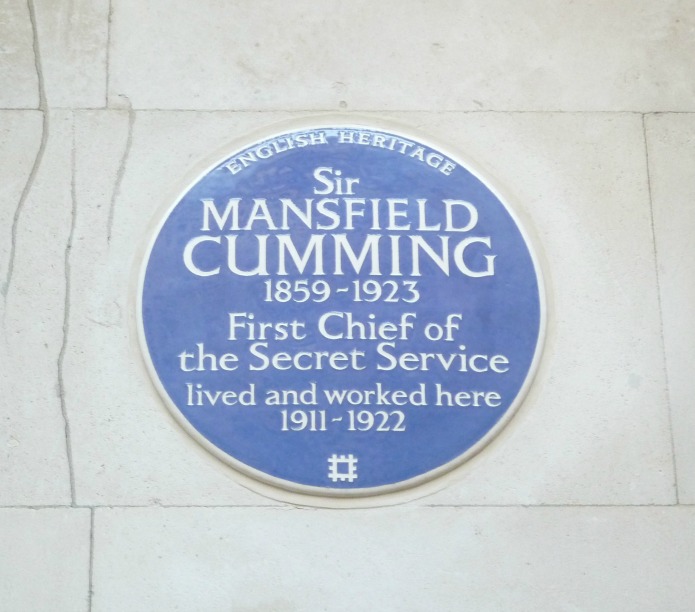 Tim Laurence later described the rather perilous state of Blue Plaques, lumbered with £50 million debt, only saved from the knackers yard back in 2012 by donations from the great and good.

English Heritage properties are now a separate entity, while the Blue Plaque is adrift and dependent on commercial backing – individual memberships cost £3,000 and corporate ones £7,500, which get you and yours tables at the annual Blue Plaque dinner, automatic attendance at unveilings, Blue Plaque walks with historians etc. Logos on the plaques soon, I hope not?

Talking Statues: Picking up the phone to Newton

Talking Statues is a project using playwrights, actors and mobile technology to put words into the mouths of several public statues around London and Manchester. The statues will begin to talk on 19 August and in order to hear them you need to swipe your smartphone over signs beneath the statues. Actors lending their voices to statues include Dominic West as Achilles in Hyde Park, Jeremy Paxman as John Wilkes in Fetter Lane and Patrick Stewart as the unknown soldier at Paddington Station.

For visitors to London who want to document their trip through photography for sharing on social media or with family and friends back home, here are 10 iconic photo locations around the city.