The View from My Window: Still in the Still of the Night

I believe in ghosts. Not the chain-rattling, shroud-clad nebulae that float in and out of Shakespeare’s plays and Dickens’ stories. I’m referring to people who have `moved on’ but still come back for a visit, who can talk and walk with you. Souls… Spirits… Whatever we want to call them, it’s impossible to have lived in a place like Hong Kong like we did for a dozen years and not believe in them. Just impossible.

My father came to visit last evening when I was staring out the window here in Bow, East London, wondering when All This was going to turn into All That. `You know, Ste’ – I don’t hear that nickname very much anymore so it was clearly him – `we’ve been through all this before.’ I knew what he was talking about. His father died of the so-called Spanish influenza in October 1918 after ` eight days of influenza, seven days of pneumonia,’ according to the death certificate. Bernard Joseph Fallon was just 36, a policeman who a dozen years before had arrived in Boston from a hard-scrabble village called Dysart in Ireland’s County Roscommon that had the Irish bare necessities – a Catholic church and two pubs – and not much else. His widow, Molly, was pregnant, their four sons under the age of six. `It was tough on my mother,’ Dad mumbled, `and on us kids, too.’ They all survived but one. Newborn George lived only a couple of months. According to Molly – my grandmother – she cried the baby to death.

You meet a lot of folk – some of them quite famous – when you’re ghost-friendly. I can’t offer proof of that and won’t even try. Selfies just don’t work, and as a rule ghosts don’t do autographs. I don’t really care one way or the other. Like those extraordinary carvings in Gothic cathedrals so high up in the roof rafters they are only visible to God, I know they’re there. And they know that, too.

Those are – well, let’s just call them – the happy ghosts. The ones who met violent deaths and are still walking among us in search of salvation or eternal life, they can be needy or even difficult. Even the offerings the Chinese make to these lost souls during the Hungry Ghosts Festival in late summer – the rice and fruit, the paper cars, the `hell’ money – only seem to go so far. But it will keep them quiet for a while.

I dreaded the Tower of London tutorials when I was training to qualify as a London Blue Badge Tourist Guide a few years back. I’m not especially what the French call frileux (cold-sensitive) and one would expect a 1000-year-old stone structure on the riverfront to be less than balmy in the late autumn, right? But positively bone-chilling, particularly around the face and neck, almost as if icy fingers were caressing you? One morning I’d had enough, and I turned to the only person I thought might have some answers: a fellow trainee from Hong Kong. `Ah Wing’ (not his real name), I asked. `Are you feeling anything strange here?’ I gestured to my neck and grimaced. `Yeah, lotta ghost,’ he said. So, we concocted a plan. He’d get the joss sticks, I’d get the matches and we’d both arrive early the following week. I’d like to say the sun shone above Her Majesty’s Royal Palace and Fortress of the Tower of London that Saturday morning in late November and never disappeared, but that would be a lie worthy of Donald Trump. It remained as cold as a well-digger’s bottom, but the ghosts disappeared – or at least left us alone. 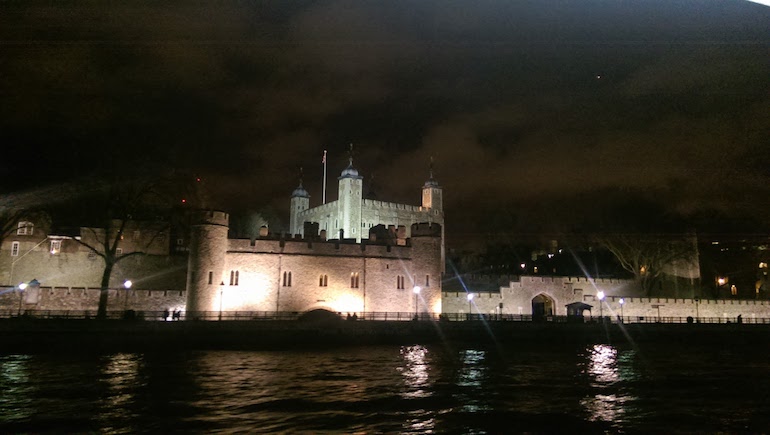 The Tower of London at night. Photo Credit: © Steve Fallon.

I’m suddenly on Ditson Street in Fields Corner in Boston. I’m walking up the back stairs to the second floor of a triple-decker, a wood-framed house very typical of New England. There’s a small back room with a double bed that almost touches the walls. It’s stuffy and hot as Hades, a record-breaking 78˚F (26˚C) for a Friday afternoon in October 1918. Bernie is in the bed, wheezing and spluttering; as his lungs fill with fluid, his face and hands turn blue. Sitting in a chair beside the bed, Molly continues to wring her hands and weep into a handkerchief, beyond herself with grief and worry.

Looking on, I think: can’t I time-travel? Bring me that hardship, all the trouble and pain and just dump it all in my lap. I’m still healthy. Britain’s National Health Service is looking after us all. The American government just sent me a fat emergency cheque (sorry `check’). My husband, Mike Rothschild, has stocked the larder with ingredients for us to concoct feasts of Japanese gyoza, Hungarian pörkölt, Thai gang gai and franks and beans; it would take us months to starve. I. CAN. HELP. YOU. It’s almost a shout. Into the void.

Nothing happens, of course. I’m being silly. Everyone knows there is no such thing as time-travel – apart from films and dreams. And anyway, these people are all dead now, their grief and despair silenced, the poverty alleviated. And we’ve got more than enough of all of that right here in 2020 among us the living.

Back at my window in Bow, East London, I put my arm on my father’s shoulder and say, `Come on, old man, let’s get back to work.’ And he shoots me that smile of his – that half-crooked, slightly self-conscious smile that I’ve carried with me for almost a half-century now. And I know what he’s going to say: `Ste, you’re now 10 years older than I am.’ And you know what? He’s right. I’m older. But I’m still not wiser.

I Want A Picture-Perfect White Christmas In London

In December our thoughts turn to Christmas. We think about our family, friends, Christmas cards, food (lots of it!) and presents - will Santa pass by this year? Also, just as important, the reason for Christmas: the birth of Jesus. But what we also think about is the weather - will it snow? This question set me thinking – why do we feel Christmas isn’t really Christmas if it doesn’t snow?