Last November, fellow London Blue Badge Tourist Guides Tim Hudson and Jo Hoad organised us one early morning for an outing to look for the body and hear the story of Richard III at Bosworth and Leicester.  Richard was the last king of England to die in battle, the last Plantagenet monarch and, after a short reign of just over two years, died calling out “Treason! Treason!” not, as Shakespeare has it, “A horse, a horse, my kingdom for a horse!” 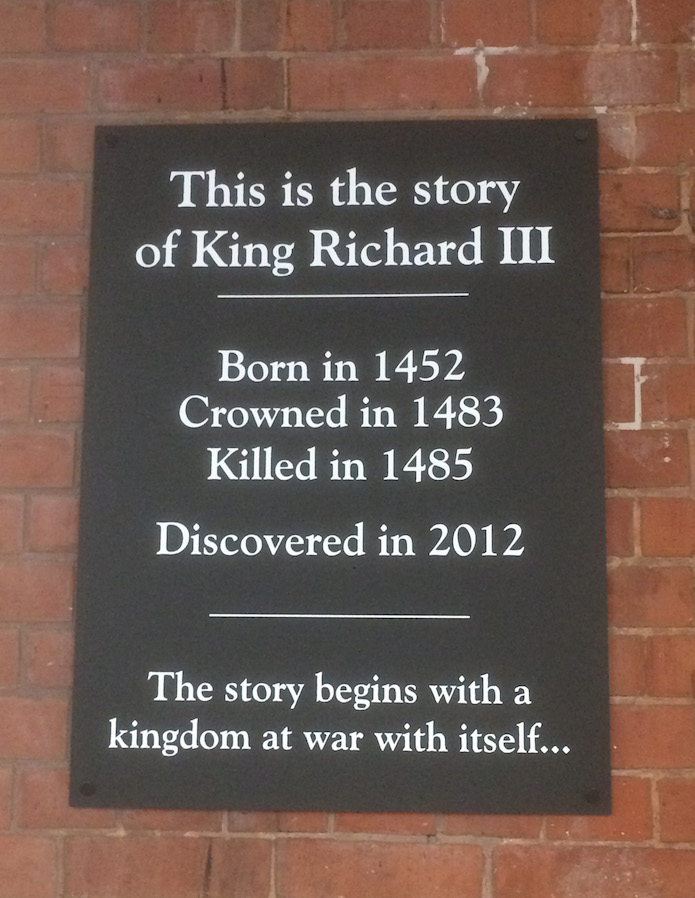 Shakespeare was peddling the official line that Richard was an evil hunchback responsible for the deaths of his nephews and brother. The jury will be forever out on that one, although the Princes in the Tower certainly and conveniently disappeared from view soon after Richard had them sent there and then declared illegitimate. His brother, the Duke of Clarence, was not drowned in malmsey but executed on the orders of Edward the Fourth. There was little love lost between Clarence and Gloucester, the elder brother ambitious and disloyal, the younger one devoted to Edward – but not to his sons.

Tim Hudson is a convinced Ricardian and wore the white boar symbol of those who feel he was traduced by a history written by the victors, in this case Henry Tudor. Henry had been born to the then 13-year-old Lady Margaret Beaufort and his claim to the throne was weak but was strengthened on the battlefield by his mother’s husband Lord Stanley who threw his weight behind his stepson rather than his king (hence the cry of “Treason!”).  Marriage to Richard’s niece Elizabeth sealed the deal and the Tudor line began.

Modern research indicates that the battle was actually fought about two miles from the modern Bosworth visitor centre. Richard’s army outnumbered that of Henry and he was the more experienced soldier but, unable to rely on Stanley and with little popular support, he had to force the issue and bravely charged towards his rival, whose standard bearer he killed. Richard was unhorsed and became bogged down in marshy ground where he was hacked to death, refusing to flee, dying as he defended his crown. What would have happened if he had got to Henry and killed him? On such slim margins does history turn. 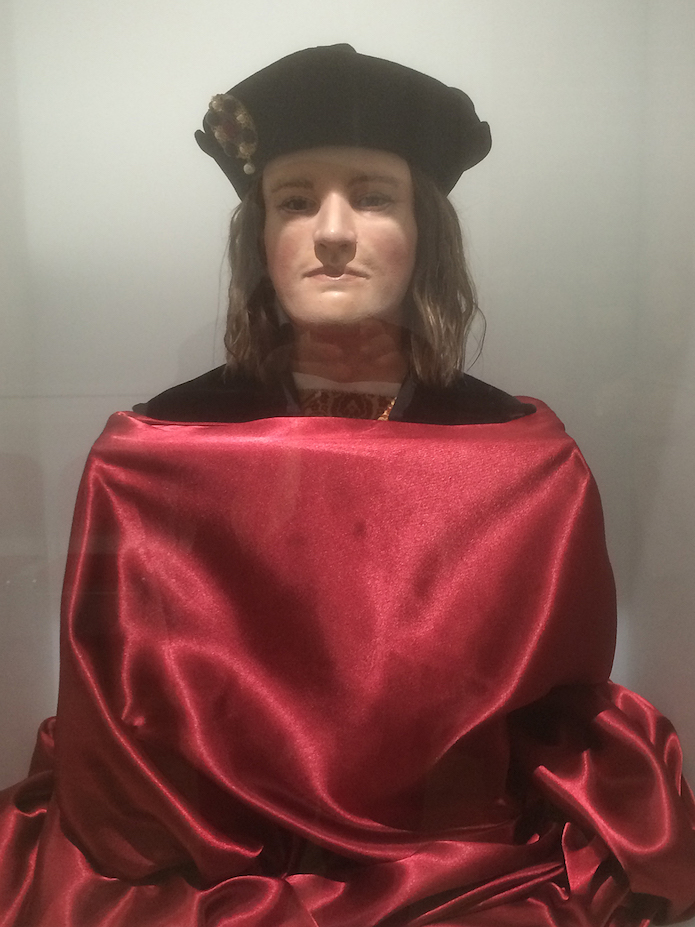 Richard’s supporters commissioned a statue of their hero which stands between the cathedral and the visitor centre. Advances in archaeological science mean that the bones discovered in August 2012 could be positively identified through comparing the mitochondrial DNA of a descendant of Richard’s sister, his only son having died. Richard’s head was portrayed through facial reconstruction surgery and is on display near where his skull and skeleton was found. All that were missing were the feet and – Shakespeare was right in this, at least – he did have a twisted spine.

Richard’s body was originally buried at Greyfriars monastery with little ceremony and was lost at the time of the dissolution until its well-publicised discovery, largely as the result of the fund-raising efforts of prominent Ricardian Philippa Langley. She and many others felt that their hero should have been buried in York Minster but Leicester, England’s least visited cathedral, won out in the end and has made an excellent job of presenting the tomb and story of this little-loved – or most misunderstood.

Windsor Castle is the largest and oldest inhabited castle in the world. It is located about an hour from central London and visitors can see the sumptuous State apartments, the spectacular display of heraldry in St George’s Chapel and even take a peek at the Royal residential apartments.

Richard III: The King in the Car Park

In the Middle Ages, Edward the Confessor, King John and Richard II were exhumed, examined and put in new resting spots. So the reinterment of Richard III in Leicester Cathedral shortly before lunchtime on Thursday 26 March, after four days of pageantry and commemoration, follows ancient tradition.