On what would have been her sixtieth birthday a new statue of Diana, Princess of Wales was unveiled at Kensington Palace by her two sons Prince William, Duke of Cambridge and Prince Harry, Duke of Sussex. Also present at the unveiling were the Princess’s brother Earl Spencer and her sisters, Lady Jane Fellowes and Lady Sarah McCorquodale.

Sculptor Ian Rank-Broadley was selected by the princes to represent their mother. He has previously portrayed both the Queen and the Queen Mother in commemorative coinage. Five bronze busts of British women who have won the All England Women’s Tennis title are portrayed by Rank-Broadley outside the clubhouse at Wimbledon and he has also worked on the Armed Forces Memorial at the National Arboretum in Staffordshire, for which he won the Marsh Award for excellence in public sculpture. 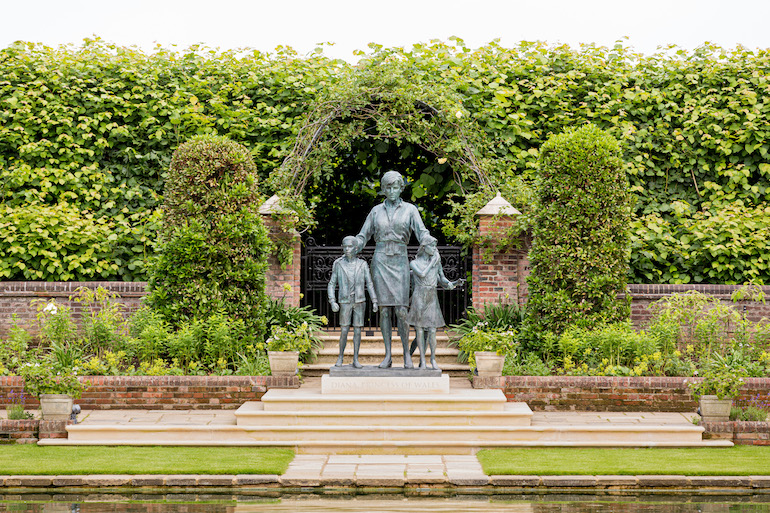 Rank-Broadley’s statue of Princess Diana portrays her with three children, who represent ‘the universality and generational impact of the Princess’ work’, according to a statement from Kensington Palace. Diana worked with many children’s charities and was a patron of the Great Ormond Street Hospital for sick children in London. The hospital still receives royalty payments from performances and publications of Peter Pan, the author J M Barrie having willed the proceeds of his famous work to it.

The Princess of Wales is portrayed with the children as she was a strong believer in the power of youth and thought that young people have the power to change the world. The Diana Award was established in 1999, two years after her death, with a mission to ‘develop and inspire positive change in the future of young people.’

Still much-loved in Britain and throughout the world, Princess Diana was born near the Queen’s home on the Sandringham estate on 1st July 1961. She worked in London as a nanny and cleaner while living with friends in a flat in the Earl’s Court area given to her by her mother, Frances Shand-Kydd. Diana became Princess of Wales when she married Prince Charles in Saint Paul’s Cathedral in London on 29th July 1981. The New Zealand born opera singer Kiri Te Kanawa sang at the ceremony, which was conducted by the Archbishop of Canterbury with 3,500 people in attendance and a television audience estimated at nearly one billion people. 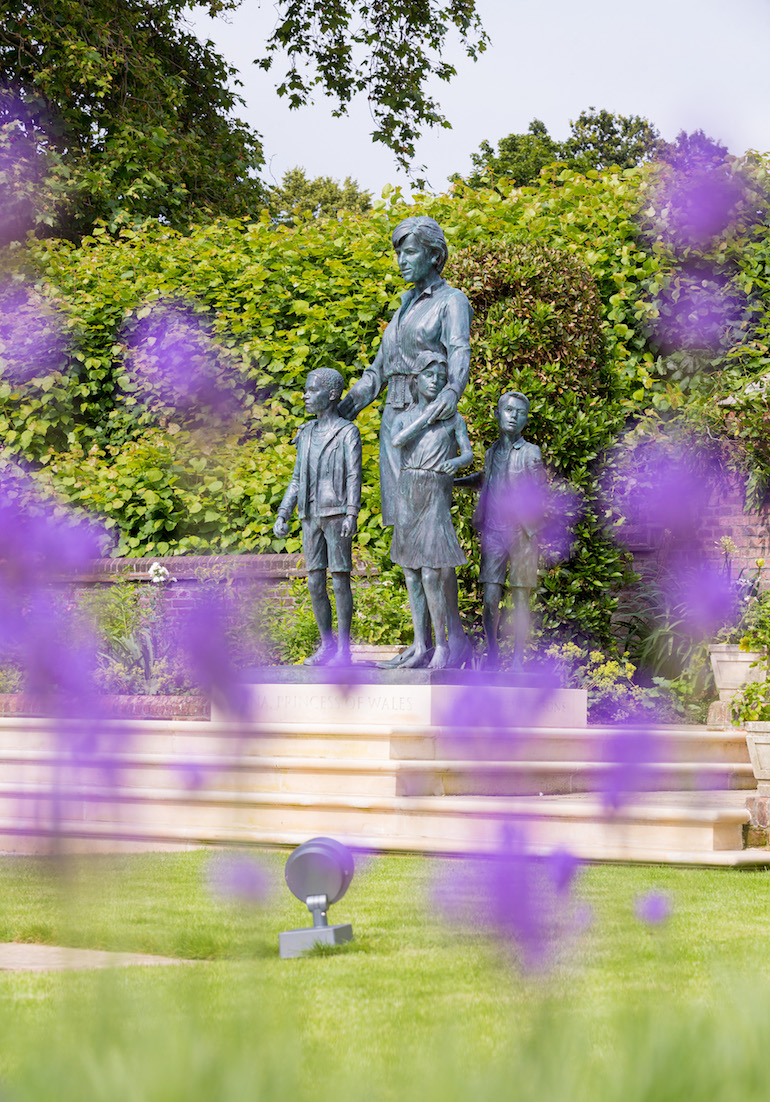 At her wedding, Diana wore a silk and lace dress designed by Elizabeth and David Emmanuel which had a twenty-five foot (7.6 metres) train, the longest in royal history. The dress was decorated with 10,000 pearls and can be viewed at a special exhibition Royal Style in the Making in Kensington Palace until January 2022.

Charles and Diana divorced in 1996 and the Princess lived permanently at Kensington Palace afterwards. Flowers were laid outside the palace in her memory after her death in a car accident in Paris in 1997. Diana’s statue stands in the Sunken Garden, a favourite spot for the Princess, and on the plinth is a quotation from the anonymous poem The Measure of a Man:

‘These are the units to measure the worth
Of this woman as a woman regardless of birth.
Not what was her station,
But had she a heart?
How did she play her God-given part?’

London’s Blue Badge Tourist Guides are experts on the royal family and can all take visitors to the capital to sites associated with Princess Diana.

Halloween History: Attitudes to Sorcerers and Witches in the Elizabethan and Stuart Courts

To put it mildly, attitudes towards witches and sorcerers in the Elizabethan period were confusing and often contradictory. While Bloody Mary (reigned 1553 - 1558) was vicious in her treatment of witches, Elizabeth I (1558 - 1603) had a more ambivalent relationship to this subject. After all her mother, Anne Boleyn had been accused of being a witch because of a malformation of her left hand, which appeared in the form of an extra finger. Elizabeth, as a strong female ruler, may not have been happy about hunting down the fair sex, therefore, and accusing those who might be innocent of any crime.

On the evening of 11 December 1936 King Edward VIII, having reigned for only 327 days, informed the world that he had abdicated in favour of his younger brother, who became King George VI. In his famous broadcast from Windsor Castle he said to the world: “I have found it impossible to carry the heavy burden of responsibility and to discharge my duties as king as I would wish to do without the help and support of the woman I love.”