The Story Behind Royal Gun Salutes

Regular and Reserve British Army soldiers marked the seventieth anniversary of the Queen’s Accession to the Throne on Monday,  7th February, in London with a celebratory gun salute. The Queen ascended to the throne on 6th February 1952 but, when the day itself falls on a Sunday, as happened in 2022, the salute is not fired until the following day.

What are gun salutes?

Customarily fired both onshore and at sea, gun salutes are a sign of respect or welcome. Royal gun salutes are fired on special occasions such as anniversaries and birthdays by military personnel from various locations in London and at saluting stations across the United Kingdom and abroad as a mark of respect and admiration of the monarch. They are traditionally fired from locations in London, Portsmouth, Colchester, Plymouth and York in England, Edinburgh Castle in Scotland, Cardiff in Wales, Hillsborough Castle in Northern Ireland and Gibraltar.

In anticipation of their arrival, the Band of the Grenadier Guards performed celebratory music near the firing position in Green Park. Just before midday, the Gunners placed the Guns into position for the royal salute. On the word of command, each of the six Guns will fire blank artillery rounds at ten-second intervals until forty-one shots have been fired. After the Guns are collected, the Band will escort the horses, guns and gunners out of the park. 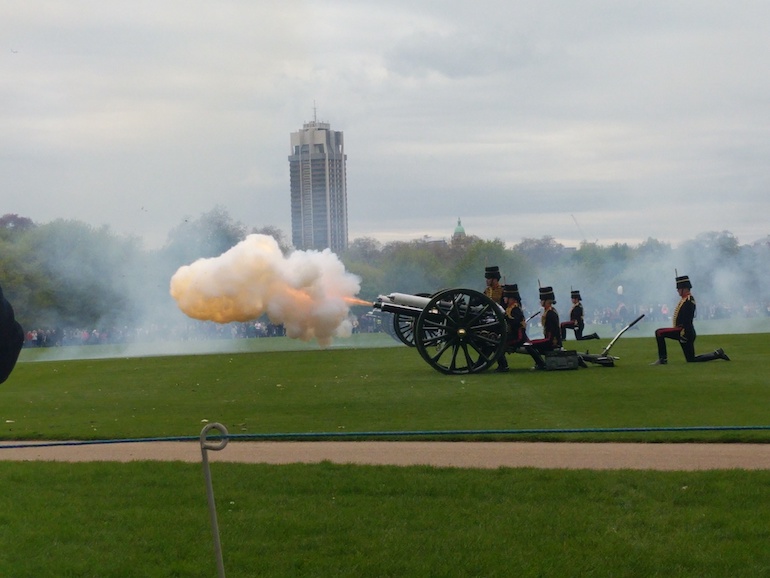 When do the gun salutes take place throughout the year?

Gun salutes can be heard across the country four times a year in honour of the Queen. The first one being Accession Day on 6th February, followed by the Queen’s Birthday on 21st April, Coronation Day on 2nd June and finally the Queen’s Official Birthday in June, during the summer when the event is marked by the Trooping of the Colour Ceremony. The Queen usually spends her actual birthday in April with her family.

Traditionally, the only public acknowledgement of the Queen’s birthday in April has been gun salutes at midday: a twenty-one gun salute in Windsor Great Park, a forty-one gun salute in Hyde Park, and a sixty-two gun salute at the Tower of London. In 2021 the Queen decided not to have gun salutes for her birthday, because the day fell within the official period of grief following the death of her husband The Duke of Edinburgh.

In a statement, the Queen said: “While as a family we are in a period of great sadness, it has been a comfort to us all to see and to hear the tributes paid to my husband, from those within the United Kingdom, the Commonwealth and around the world.”

Where does the tradition originate from?

The firing of gun salutes is a custom dating to the early days of sail. Ships, when on goodwill visits to foreign ports, discharged all their guns to seaward on arrival thus indicating to the authorities ashore that they came in peace with empty guns. In ancient times, even numbers were associated with mourning, therefore the number of these gun salutes was always odd and this tradition has been carried on until today. In London, the honour falls on the King’s Troop Royal Horse Artillery in the Royal Parks and the Honourable Artillery Company at the Tower of London. 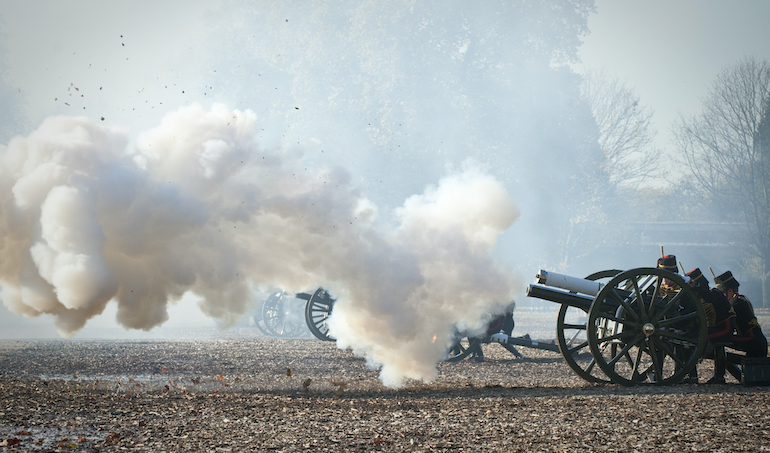 Why is 21 the most common number of gun salutes?

According to one theory, British ships carried seven guns so seven shots became the standard signal that the ship was now unarmed. This was more of a symbolic gesture because ships carried enough gunpowder and ammunition to reload if they needed to. The guns onshore would welcome the incoming ships by firing three rounds for every shot fired from the ships – putting the total number of shots fired onshore at twenty-one.

Apart from the Queen – who else gets saluted?

As times moved on and technology developed, ships grew bigger and better, and it became more common for the ships to fire twenty-one gun salutes themselves. In 1808, the twenty-one gun salute officially became the standard salute to honour British royalty. Although traditionally the honour is reserved for the head of state, heads of government also get a twenty-one gun salute, and in the case of the United States so does the country’s flag. In 2018, President Trump’s visit to the UK was marked by a forty-one gun salute the moment he arrived in Buckingham palace in April.

This brings us to the next question. Why forty-one? The standard Royal salute of twenty-one guns is reserved for heads of state and, on occasion, heads of government. When the salute is given from a Royal Park or a Royal Fortress, an extra twenty guns are added. President Donald Trump was saluted at Green Park, which is a Royal Park, and the Tower of London, which is a Royal Fortress, hence the forty-one gun salute.

The birth of a Royal baby is marked by a sixty-two gun salute from the Tower of London: twenty-one to mark the Royal occasion, a further twenty are fired because it’s a Royal Fortress and an additional twenty-one rounds will be fired as it is in the City of London.

The highest number of gun salutes in the UK is 124. This happens when the Queen and Duke of Edinburgh’s birthdays occur on the same weekend and is given from the Tower of London: twenty-one guns, plus another twenty for it being from a Royal Fortress, plus twenty-one for it being inside the City of London. This figure is then multiplied by two to reach 124. 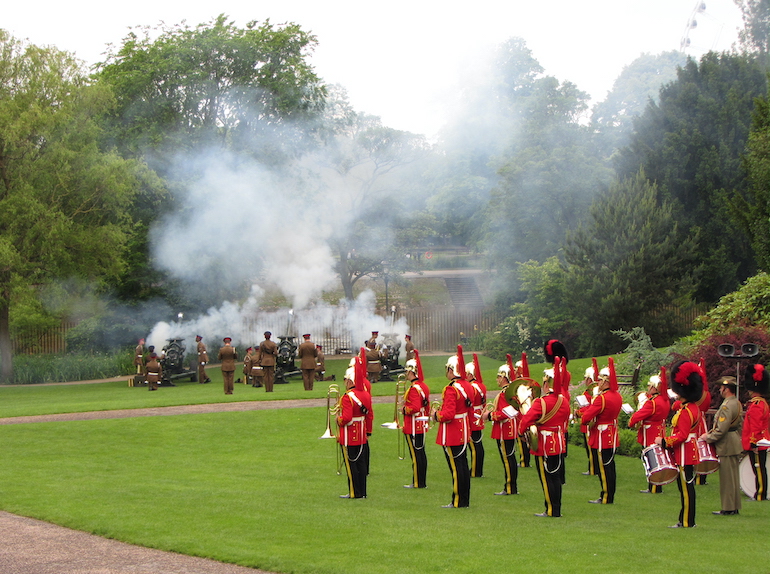 Who fires the guns?

The honour of firing the salutes falls on the King’s Troop Royal Horse Artillery. Today, the role of the King’s Troop is purely ceremonial. The Troop’s important history dates back to 1793 with the formation of the Royal Horse Artillery. The unit in its current form was created after the Second World War in 1946 by Royal Decree to have “A Mounted Battery to fire salutes on state occasions, dressed in the traditional style”. Initially, the Royal Horse Artillery was known as The Riding Troop. King George VI renamed it in his own honour by scratching out the word “Riding” in the visitor’s book and replacing it with “King’s”.

Which guns are used?

If you are lucky enough to witness gun salutes in the royal parks, you will see puffs of white smoke emanating from six First World War-era, thirteen pounder field guns that have been pulled there by seventy-one horses from the King’s Troop, Royal Horse Artillery.

When to see gun salutes?

Under normal circumstances when the country is not in a period of official grieving or a pandemic, royal gun salutes can be heard on the following days: 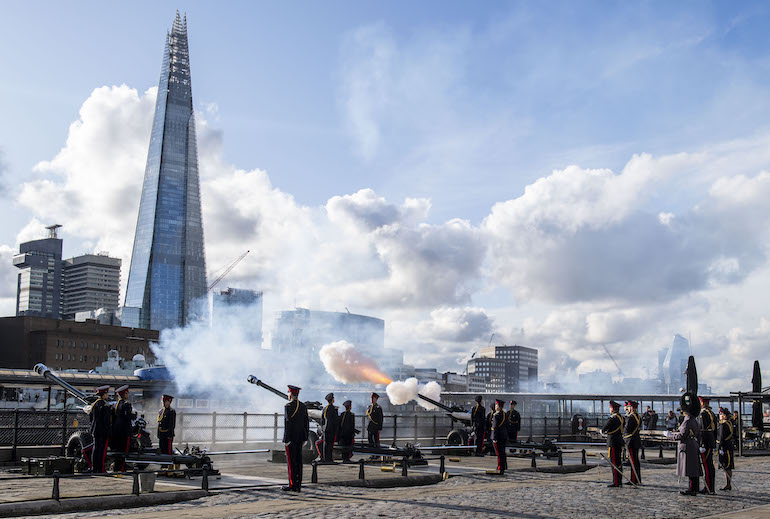 London's Year Of The Zeppelin

In commemorating of the centenary of the First World War, much of our attention has been focused on the soldiers that fought and died in foreign lands in what was described as a war to end all wars. Simon Rodway’s walking tour from Holborn to Liverpool Street on 11 November  2014 made us look at the events closer to home – the deadly menace that was the Zeppelin air ships that flew almost silently over the London sky in 1915 wreaking havoc on the unsuspecting Londoners below by launching the first of many incendiary bombs here in London and other parts of England. It was to be known as the Year of the Zeppelin. The catastrophe that befell London lasted 20 minutes but our walk would take a little longer.