What could be more quintessentially English than afternoon tea? This is often one of the top items on London visitors’ itineraries, but many are unsure of where to go or surprised by how expensive it can be.

I’ve been enjoying and writing about the afternoon tea ceremony since I first moved to London nearly 30 years ago. How times have changed! The landscape has grown, both in terms of price range and creativity of menus. Restaurants and hotels have become more imaginative with themed teas, such as the Mad Hatter Tea at the Sanderson Hotel and the fashion-orientated Pret-a-Portea at the Berkeley.

Years ago, children were reluctantly tolerated. Now they are feted with special menus. At the Langham, kids can select a book to pass the time while adults linger over champagne. Le Meridien Piccadilly entices youngsters with a miniature (and edible!) version of Mr McGregor’s garden – complete with Peter Rabbit.

Another big improvement is that there are more budget-friendly options available. Now many bakeries and small restaurants offer afternoon tea service, expanding the market.

So it seems as if just about everyone can enjoy afternoon tea. But first, a few clarifications. You will not be having “high tea.” High tea is a decidedly different affair than afternoon tea. High tea was traditionally a meal for working classes when they returned home from factories or farms and is associated with the northern part of the country. It would have comprised hearty dishes like meat pies and potatoes. Afternoon tea is a far more genteel affair, associated with delicate pastries and finger sandwiches. (Note that some hotels market their tea ceremonies as “high tea” in deference to their many overseas visitors.) 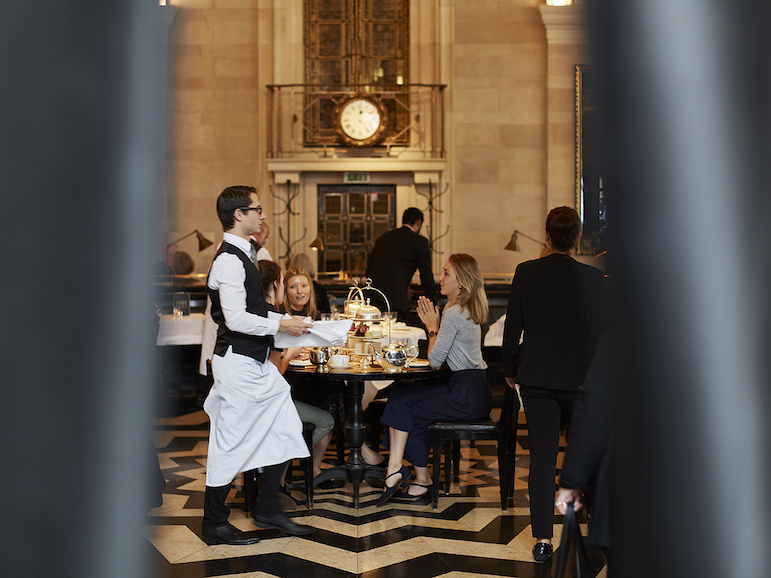 Afternoon tea at the Wolseley in London. Photo Credit: © The Wolseley.

The very polite ceremony associated with elegant drawing rooms is largely attributed to Anna, the seventh Duchess of Bedford. During the early 1800s, the evening meal was served at about 8 pm among the aristocracy. Anna felt decidedly peckish during that long lag time between midday and evening meals, so she began inviting friends to join her at home for pots of tea accompanied by cakes and pastries. As the century wore on and people were able to get out more, hotels began to take up the slack where “at home” entertainment left off.  Afternoon tea would often be accompanied by music and even tea dances became popular.

Traditions that began at the London department store of Fortnum & Mason and the Ritz Hotel still continue today. At many of the top London hotels, you will sip your tea to the accompaniment of gentle piano music.

The ceremonies at large hotels are indeed expensive. But it helps if you think of it as a special meal out. Afternoon tea in London has actually become popular during recent times of economic turmoil, as more people turn to the tea ceremony to mark a special event instead of a more expensive dinner.

Most establishments will bring unlimited refills of tea and usually about as much food as you can eat. If your server doesn’t offer additional scones or sandwiches, just ask. At lower-priced restaurants, though, expect just one serving.

It’s comforting to realise that in this topsy-turvy world, the afternoon tea ritual is still much the same as when Anna enjoyed it with her friends.

A few tips before you partake:

Following is a guide to some of the best afternoon teas in London with a range of prices and styles. Please note that menu offerings and prices listed may have changed since the publication date.

Claridge’s is the grand dame of tea ceremonies; Anna would be pleased. This one exudes class and although it costs more than others, you will leave feeling pampered. Tea is served in the mirrored foyer of the hotel, so you can watch all the beautiful people come and go. Overflow guests are seated in the Reading Room, just off the main room. It is worth requesting the main room if you want a more full-on experience.

Tea is taken very seriously here. You will be served by a tea sommelier who describes brews with the sophistication of a wine steward at a top restaurant.  Sommeliers encourage diners to have different teas with each course. Claridge’s special White Silver Tip is so delicate you can just about feel the sunshine that dried the young leaves.

Classic sandwich flavours are presented with an elevated twist. Recipes might include smoked salmon accompanied by brown shrimp and horseradish on rye and ham paired brilliantly with caramelised apple and calvados. It’s all high-quality ingredients – no processed meats here. Delicate pastries like Hazelnut Paris-Brest and Pear Belle-Helene are photo-worthy as well as delectable.

Concoctions are meticulously arranged on Claridge’s trademark green and white china, adding to the glamour. Staff will fawn throughout. We certainly wouldn’t want the floor to be cluttered, so ladies’ handbags get their own stand. 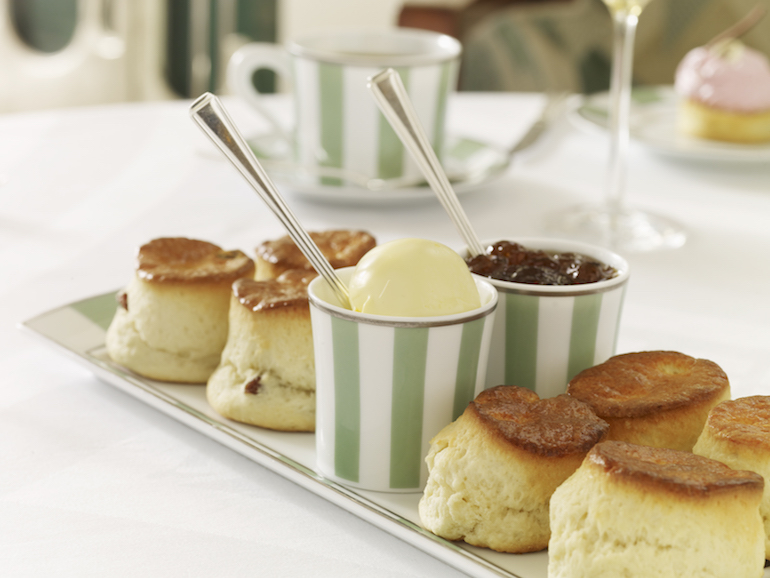 Afternoon Tea In London For The Ultimate Tourist

For those who can’t get enough of London’s classic sites, the London Landmarks tea at the Kensington Hotel features miniature edibles of some of the city’s most iconic buildings. Sink your teeth into a carrot cake Shard; a white chocolate Gherkin and a rhubarb-flavoured telephone box. The Instagram-friendly array is presented on a London Eye-shaped tea stand. Who can resist? 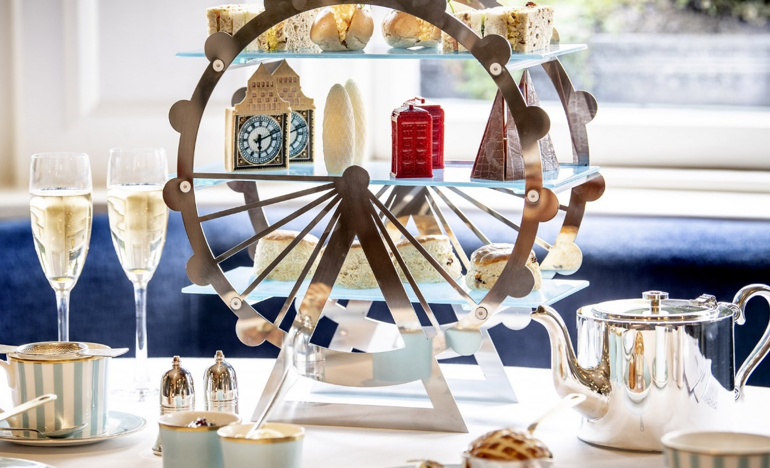 There is no bad table at the Wolseley; all the chairs and banquettes have a view of the tall, arched windows or the enormous iron chandeliers of this glorious 1920s building. The spectacularly high vaulted ceilings and all-day menu contribute to the European café ambience here; there are moments you’ll swear you’re in Paris. If you’re looking for an affordable option, in a magnificent setting, this is the tea for you.

The huge archways and marble pillars of this grand room were originally designed to showcase cars at the headquarters of Wolseley Motors. Despite the grand setting, cars didn’t sell very well, so when Wolseley Motors went bankrupt, Barclays Bank moved in until 2003. That’s when it began its incarnation as a restaurant, the brainchild of Corbin & King, the restaurateurs behind some of London’s other big brasseries, including The Delaunay and Zedel.

Sandwiches, scones and pastries arrive simultaneously on a three-tiered pastry stand; there is no delineation between courses as at the big hotels. But that can be fun – you can break with tradition and go straight to cake! It’s always busy here, so service can be a bit distracted. Because of the all-day menu, not everyone will be having tea; you might be surrounded by people enjoying an early dinner or late lunch.  A second round of sandwiches won’t be offered, but if you ask, you shall receive. All in all, good value, as long as you are not a devout foodie. 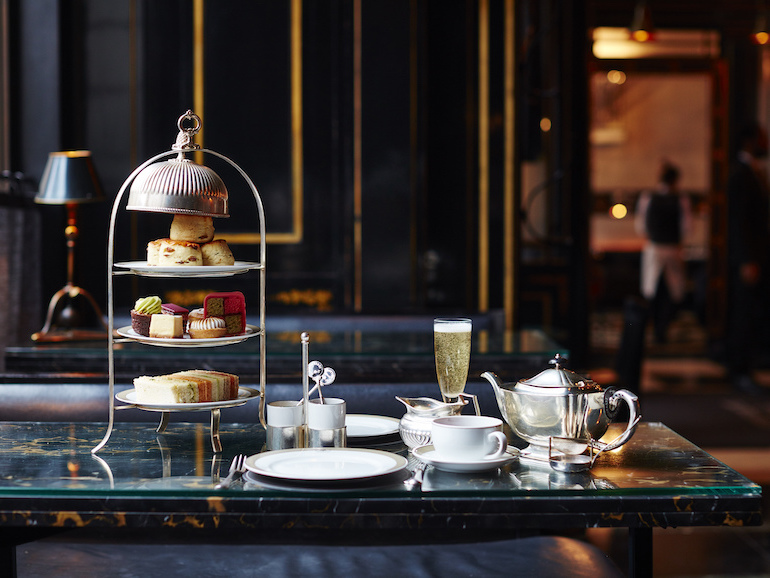 The Wolseley on Piccadilly is a grand brasserie. Photo Credit: © Emily Laurence Baker.

Fortnum & Mason is virtually synonymous with tea. The main shop, located on Piccadilly, was founded in 1707 and has been serving tea since 1926. In 2018, an outpost opened in one of the City of London’s most beautiful buildings, The Royal Exchange. You will sip your tea in the heart of history at London’s first trading centre. The original Exchange has been rebuilt several times; today’s building, now a shopping arcade, dates from Queen Victoria’s watch in 1844.

Tables are laid out beneath the super-high, sky-lit ceiling. You are surrounded by luxury shops, so it’s not an intimate occasion, but the joy of spending time in this grand building is its own reward. There is an all-day menu, so not everyone will be having afternoon tea during your visit. A three-course tea is served for half the price of the one at Fortnum’s more formal restaurant back at headquarters. And there is absolutely no pressure to dress up.

Afternoon Tea In London For Children (Or Children At Heart)

You can’t help but feel happy at the Willy Wonka-themed tea at One Aldwych. This one’s for kids (or nostalgic adults), not only because of the Charlie-themed pastries but also because the savoury portion of the tea goes beyond standard sandwiches. There is a sausage roll and a cheddar scone served with bacon-toffee jam.  The playful presentation of pastries is the highlight, with a perky cake pop and mint chocolate milk in a mini bottle shrouded by a huge puff of candy floss. Scones come with, of course, Snozberry jam.

If you really want to push the boat out, don’t miss the Charlie cocktail, a whisky concoction that arrives in a smoking teapot.

Staff are great at making children feel special. Tea is served in a bright room, and the atmosphere is considerably less formal than other hotel teas. One Aldwych is also ideally situated if you are headed to West End theatre afterwards.

Afternoon tea at the One Aldwych is £47 per person.  One Aldwych, 1 Aldwych London WC2B 4BZ 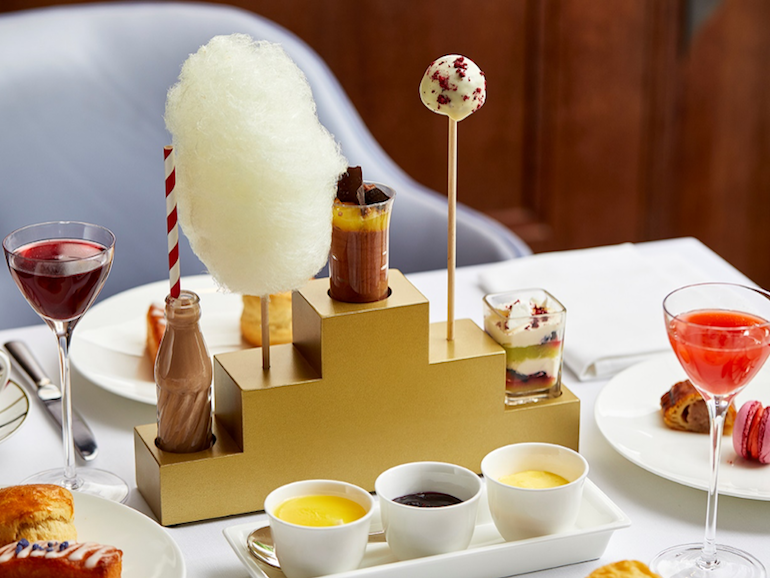 Afternoon Tea In London For Fashionistas

What better way to cap off a shopping excursion in Knightsbridge than by munching on miniature fashion treats? Afternoon tea at the Berkeley is like a simultaneous art exhibition and fashion show. Staff are accustomed to serving well-heeled shoppers who strut over in their high heels from nearby Harvey Nichols and Harrods.

The menu changes twice yearly as pastry chef Mourad Khiat highlights current fashion events and trends in the city.  He actually visits the catwalks to design his own collection. Pastry selections have honoured various designers with impressive concoctions based on their creations. Remember that oh-so-pink Molly Goddard dress that Killing Eve’s Villanelle wore in Paris’s Place Vendome? It was recreated here in a cinnamon financier with hot pink spun sugar. (Glitter added table-side.) There was also an incredibly detailed model of the popular Le Micro Chiquito handbag.

The cakes are so extraordinary that you might be tempted to save them. But don’t – this is fashion made for eating. 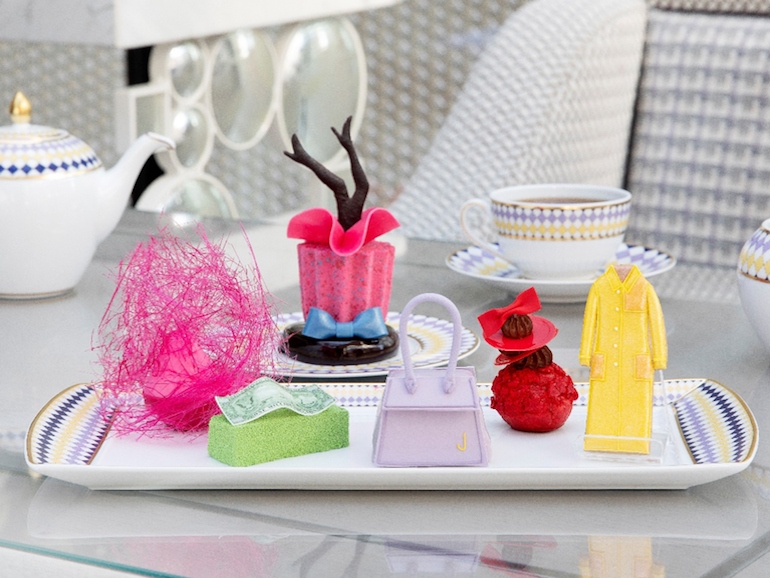 Fashion too pretty to eat at Pret-a-Portea. Photo Credit: © The Berkeley.

Afternoon Tea In London For Those Who Like An Adventure

If you’re travelling with sulky teens, the B Bakery afternoon tea bus is the one for you. It’s hard not to smile when you are presented with a full tea spread on a double-decker bus. The food doesn’t measure up to a high-end hotel, but then those formal dining rooms don’t whiz past Westminster Abbey while you’re sipping your tea. Alas, no bone china on this trip, but you will leave with a souvenir drinks cup. A couple of caveats: You absolutely cannot be late, and the route is subject to change depending on traffic conditions, so don’t have your heart set on seeing particular landmarks. But it’s great fun.

This is your holiday; let’s have fun! I’ll show you London from an historic, current and just plain entertaining perspective – aspects you might miss as a visitor or even as a UK resident. During these travel-restricted times, how about a virtual tour exploring London’s literary sites or the…

Opposite the church of St Mary The Virgin, Mortlake a path called Tapestry Court leads to the River Thames. Here you will find a plaque memorialising the seventeenth century Lower Dutch House, one of the former buildings of the Mortlake Tapestry Works.

Big Ben Restoration: London's Most Famous Bell And Clock Can Be Seen And Heard Again

London saw in 2022 to the traditional sound of the bells of Big Ben at Westminster. Although the annual fireworks display which is a part of the New Year festivities was cancelled because of the coronavirus pandemic, Londoners and visitors to the capital were able to see as well as hear Big Ben for the first time in four years since it was covered with scaffolding and silenced as a result of the restoration programme at the Palace of Westminster, better known as the Houses of Parliament.