From 24 October 2015 until 3 December 2015, the Crystal Sceptre given by Henry V to the City of London in grateful thanks for their help in loaning him money for the Battle of Agincourt will be on show at the Guildhall Art Gallery.

It will be the first time in its 600 years history that the Crystal Sceptre has been seen by more than just a handful of people; usually it is only for coronations and for the ceremonial swearing-in of each new Lord Mayor that it comes out from the bowels of the Guildhall. 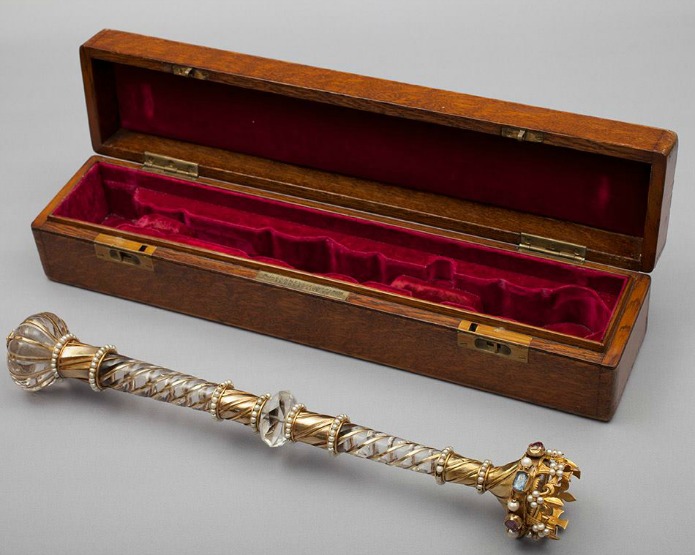 The carved rock-crystal stem is thought to have been made in Paris and was then inlaid with gold. The jewels which decorate it come from Afghanistan (red spinels), Ceylon (sapphires) and from the Arabian Gulf (dozens of pearls). It is believed that the sceptre was presented to the City sometime before February 1421, the earliest reference to it comes in a painting of the coronation of Henry’s wife Catherine of Valois in Westminster Abbey where it is seen being held by the Lord Mayor of London.

Also on display will be a silver gilded iron mace used in the battle which was presented by Henry V to the Humber village of Hedon during a pilgrimage he made to the shrines of his patron saints in the north of England, following his victory.

For more information about visiting, check out the website for City of London – Guildhall Art Gallery.

Poussin And The Dance Exhibition At The National Gallery In London

Paintings of dancing maenads, maidens, and a cavorting Bacchus in beautifully choreographed compositions are the subject of this themed exhibition which will be at the National Gallery from 9th October to 2nd January next year. Dance – both secular and religious – is one of the great themes in Western Art.