William Hogarth: A Thumbnail Sketch Of A Great London Painter

Visitors who arrive in London via Heathrow Airport will pass the Hogarth roundabout in Chiswick as they approach the city along the A4 from the west. They may see the house in which William Hogarth (1697 – 1764) lived, which is now a museum. Their Blue Badge Tourist Guide may even tell them that it is believed that Hogarth’s habit of sketching people’s faces on his thumbnail gave us the phrase ‘a thumbnail sketch.’

Who is William Hogarth

William Hogarth lived in Chiswick, which was in his day a small village outside London. It was well-known for its dairy produce, the name meaning ‘cheese town’. A statue of the artist was unveiled in Chiswick High Road in 2001 by the writer and broadcaster Ian Hislop with the artists David Hockney and Peter Blake attending. Hislop compared himself to Hogarth, saying that they were both ‘short, satirical and bad-tempered.’ 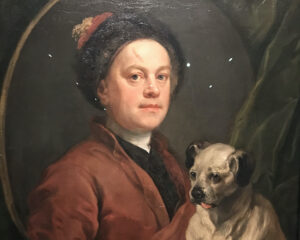 Like that other great artist of London, William Blake, William Hogarth was born to a lower-middle-class family in the heart of London and was apprenticed to an engraver in his early years. Their lives overlapped by seven years and both artists had to work hard to earn a living but otherwise, they were very different in their approaches. Blake was inspired mainly by spiritual themes, Hogarth by more down-to-earth subjects.

One of Hogarth’s most famous works is Gin Lane which showed the debilitating effect gin had on life in London. It was said that it could make you ‘drunk for a penny, dead drunk for tuppence’ (two pennies), and its effect on the lives of ordinary people could be devastating. Hogarth contrasts the evil effects of imported gin with the more beneficial effects of traditional British beer as seen in his Beer Street print.

Hogarth also painted portraits of wealthy subjects in order to earn a living. Several of these are being shown at an exhibition of his works at the Tate Britain art gallery called Hogarth in Europe which runs until 20th March. Some of his most famous paintings, including a portrait of Mary Edwards, which has been loaned to the Tate by the Frick Museum in New York, are on display at the Tate exhibition. 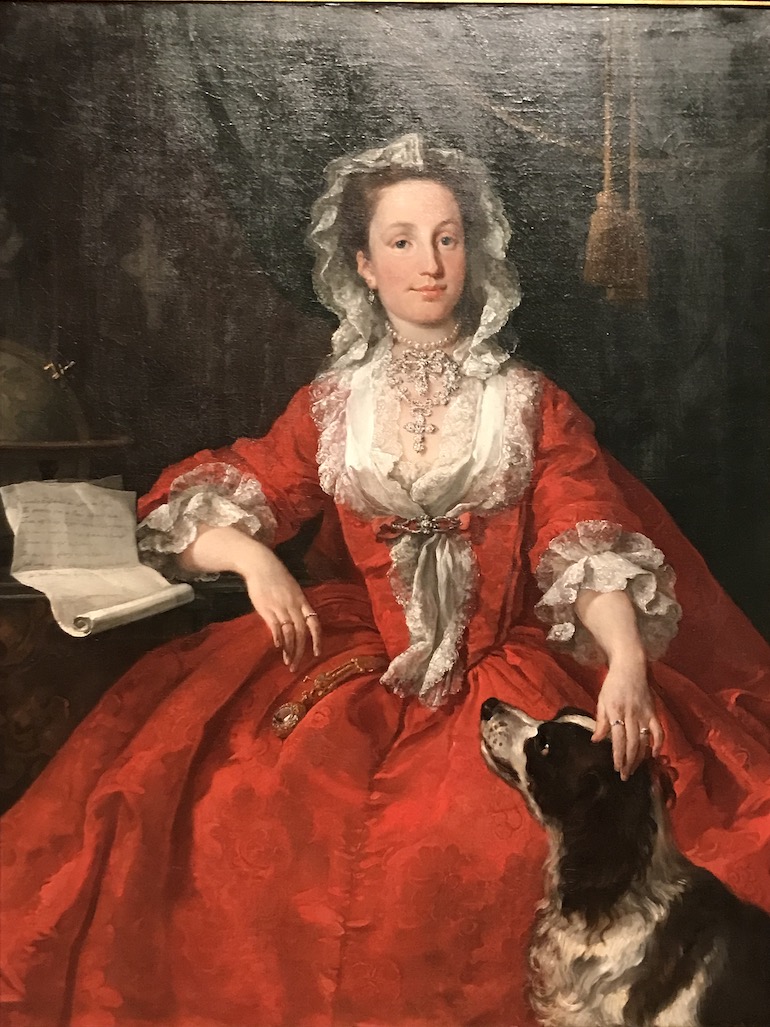 Mary Edwards was the richest woman of her day when she was born in 1704. She was a feisty character who ‘married’ Lord Anne Hamilton. (His curious name comes from the fact that he was named after his godmother Queen Anne.) However, she did not adopt his name and never acknowledged him as her husband. They had a son together but later lived apart and he married again without first obtaining a divorce.

Edwards was a friend and patron of Hogarth, commissioning a painting called Southwark Fair which is on public display for the first time in nearly fifty years at the exhibition. Hogarth’s portrait of Edwards shows a confident woman wearing diamonds with a hunting dog at her side (rather than a more conventional lapdog) and statues of Queen Elizabeth the First and King Alfred in the background. 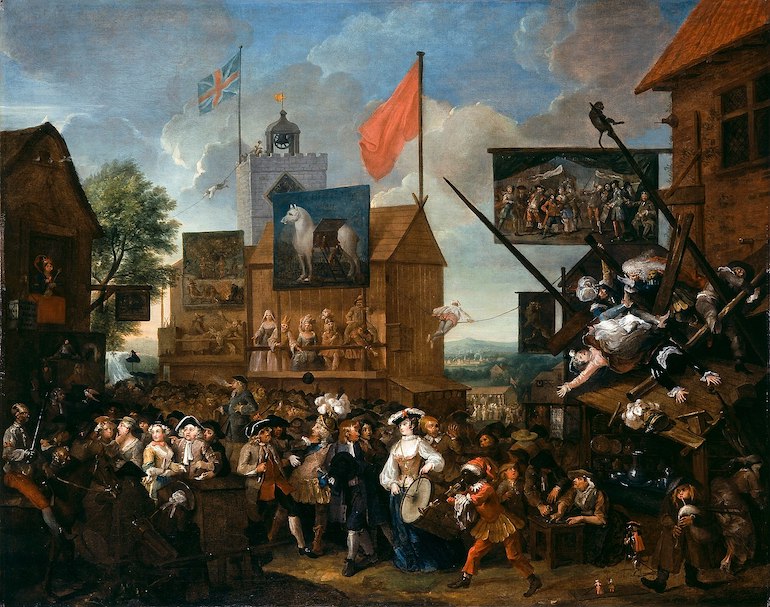 William Hogarth made a living from his wealthy clients but was not afraid to show the grim reality of life in fashionable society in his series of satirical works such as Marriage a la Mode, The Rake’s Progress and Marriage a la Mode which show the grim reality of life in the so-called Age of Elegance in England. It is through these works, rather than his portraits, that Hogarth is most remembered today.

Hogarth painted others besides his fashionable and wealthy clients. One of his best-loved paintings shows the six domestic servants he employed in his household, even though none of them were in a position to pay for their portraits. He also painted a self-portrait with his faithful dog Pug. Pug can also be seen at the side of the Chiswick statue, unveiled by a pupil from the William Hogarth School nearby. 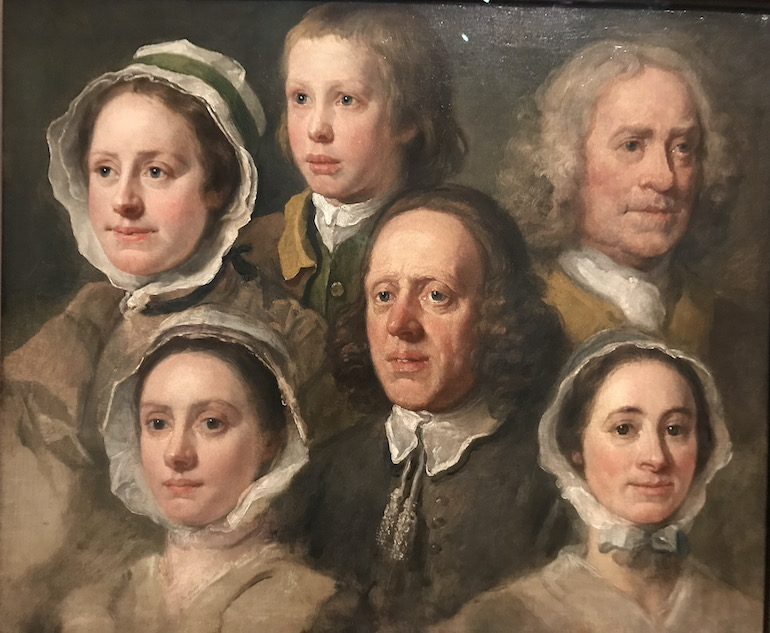 In many ways, William Hogarth was a traditional patriot and the themes of slavery and even Brexit are explored in the exhibition of his paintings. One of the most famous is The Roast Beef of Old England which can be seen at the exhibition. It shows a plump (and therefore corrupt) French monk looking greedily at a succulent joint of beef while a poor Scottish Jacobite looks on hopelessly. The painting is sometimes called The Gates of Calais, the French town in which the scene is set.

Hogarth was a professional painter who knew how to appeal to a mass audience. He eloped with the daughter of a fellow painter Sir James Thornhill whose work can be seen at Saint Paul’s Cathedral and in the Painted Hall in Greenwich. Thornhill did not think that the then-unknown Hogarth would be a suitable son-in-law but he came to recognise his talents and the two artists were later reconciled.

William Hogarth and the composer George Frederick Handel also helped Thomas Coram set up the Foundling Hospital for abandoned children in London. Coram, Handel, and Hogarth did not have children of their own but were all involved in helping the large numbers of infants who had been abandoned in London at the time. Hogarth contributed paintings and encouraged other artists to do so, while Handel donated an organ and conducted concerts to raise funds for the institution.

After his death in 1764, Hogarth was buried in the grounds of Saint Nicholas’s church in Chiswick, and his wife Jane was later buried next to him. It is a quiet church in a pleasant suburb of London, one which many tourist coaches pass on the way to Heathrow airport or Windsor Castle. The area will forever be associated with this distinctly English artist who showed us what life was like 300 years ago. 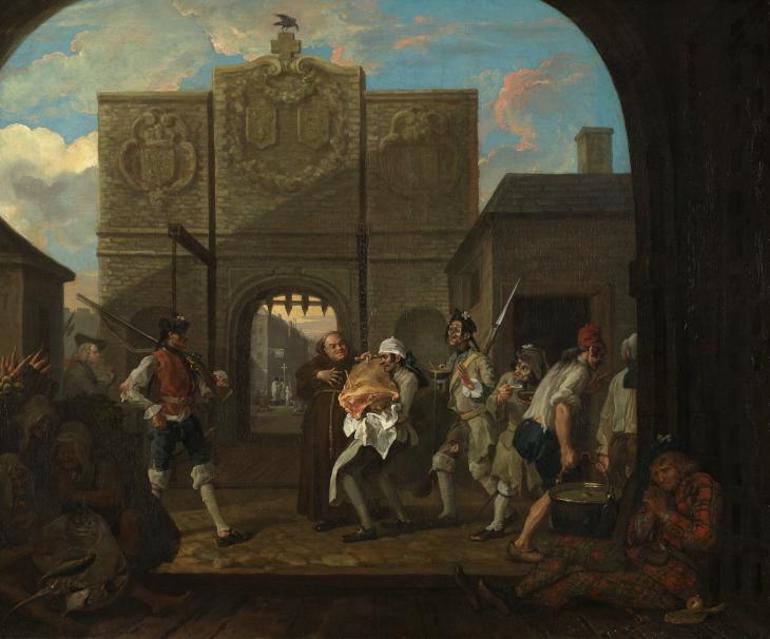 London’s tourism boom has continued during the second quarter of 2015, with the city welcoming a record 5.1 million international visitors between April and June this year, 6% more than the same period last year, according to the Office for National Statistics International Passenger Survey (IPS).

Since its inception in the first part of the 20th century, the cinema has been a staple of British entertainment. The multiplexes of the 21st century have enjoyed a resurgence following the nadir of the 1980s and early 1990s, but the real golden age of cinema came with the development of the “talkies” in 1927 and the subsequent boom in the construction of new cinemas in the 1930s.

Now just a week before the RHS Chelsea Flower Show