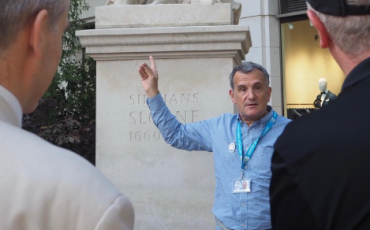 David enjoys working with families, as a Dad himself.

David produced, scripted, managed and Directed award-winning fact-based TV programmes for 20 years for the BBC, the other UK channels, NBC and Discovery – and he became a guide to share the TV Producer’s eye for making our complicated world accessible and interesting.

More recently, he has twice been to the Queen's tea party at Buckingham Palace and has visited 10 Downing St both on official business and on an information trip for tour guides.

Tell him your needs, and he can create a specialist guiding programme just for you, using the skills he learnt in television production.

Recent comments about David include -

“I'm not one for participating in organised events with people I don't know, so I was slightly dragged along to this guided walk by my more enthusiastic wife and daughter - it was just the three of us plus our guide, David. However, as soon as David approach us at the rendezvous, I had a good feeling and the next two hours were a pure delight. The tour was informal, but well-prepared and informative, …. I was sorry it had to come to an end and left David with a reignited faith in society and optimism for a better collective future” (Roy, Yorkshire)

"I did just want to follow up and tell you how much we enjoyed our day with David.  David was great, very knowledgeable, and willing to answer all our questions!  While we do wish we could have had better weather, we all loved our visit to Windsor Castle and Stonehenge and the day was a highlight of our trip." (family of four, Georgia, USA)

"This tour had good information, a friendly and enthusiastic tour guide with a sense of humor, lovely sites in central London and it was fun. Would recommend” (Will P, US)

“Brilliant day. We made a spur of the moment decision to go on the tour and we couldn't have been more pleasantly surprised! David is a fantastic, friendly guide and a true .. expert.

“Interesting Walking Tour of London. David gave an informative, yet friendly tour of a number of Orwell's spots, along with paired readings by Orwell. In addition, he emailed us an article that directly related to my interest in Orwell. As a local politician, he also had a unique perspective on the UK political scene...(NbptUH, Newburyport, Massachusetts)

“Very informative- recommended!This was a very informative and enjoyable tour. David is a friendly and knowledgeable guide and along with the interesting information …. we learnt a lot about the areas of London we passed through. We also now have lots of ideas for further reading...(Rob, Inverness, Scotland)         From https://www.tripadvisor.co.uk/Attraction_Review-g186338-d4520972-Reviews-George_Orwell_s_London_A_Walking_Tour-London_England.html

David is qualified to guide you around

Though 100% Brit, and the outgoing Mayor of Islington the historic central London Borough where he lives with his family, David likes to think he can see Britain as outsiders would see it. After working in TV, he spent many years working in Brussels for international organisations.

He is a guide because he's keen to share his inside knowledge of London with visitors to a city he loves.

Islington - A Diverse And Distinctive Part Of London

When Henry VIII dissolved England’s monasteries in 1534 he handed over Islington and Archway to Thomas Cromwell. However, the unfortunate Cromwell had little time to enjoy his acquisition as he was beheaded in 1540. Today, Islington is a part of London supposedly full of well-off people living in expensive homes who like to feel they are spokespeople for those less fortunate than themselves. In fact, over 40% of Islingtonians live in social housing and almost 30% live in privately rented flats, so homeowners make up only 30% of this diverse Borough. Some of those houses are now very expensive!

Why London Has The Best Literature Tours In The World

If you’re a fan of literature, there’s no better place to visit than London. Book a tour with a Blue Badge Tourist Guide and walk in the footsteps of authors like William Shakespeare, Virginia Woolf, and Charles Dickens. The city has preserved its history so well in places that you can still feel the source of the writers’ inspiration.