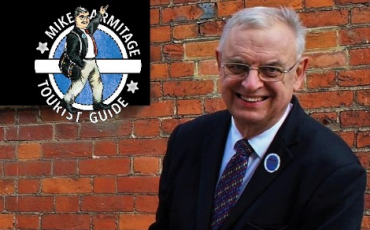 Hi, I’m Mike Armitage and I have been one of the foremost guides in London for ten years

Your time in London is precious, so don’t waste it.

London is one of the great cities of the world, and I can paint a vivid picture and give you so much more than a guidebook.

Qualified to guide all the major attractions in London, I delight in showing visitors the hidden corners and fascinating details of both the historic and modern city. I also love meeting visitors to the UK and talking with them. As well as Britain and its history, I have recently had conversations as diverse as British road markings, the difference between ale and beer, where the London set episode of Columbo was filmed and whether Ringo Starr was a better drummer than he is normally given credit for.

About 70% of my clients are Americans, but I also take pleasure in showing British people some of their own capital city, and learning from them.

I am particularly interested in the history of the First and Second World Wars and enjoy taking visitors to the Churchill War Rooms (CWR), HMS Belfast, or the Imperial War Museum (IWM), as well as pointing out the still visible traces these conflicts and the Blitz have left in London

As a Windsor resident, my expertise in guiding the Queen’s favourite home, Windsor Castle, the town and Eton, is second to none. I also enjoy guiding Kensington Palace, a rather overlooked little gem in Kensington Gardens

I pride myself on my flexibility and will tailor any tour to YOUR requirements.

I manage group sizes from individuals, couples and family groups all the way up to large groups of 25 and conduct tours on foot, in cars, on coaches, and on public transport.

Let me know what your interests are and the make-up of your family or group and I’ll pull together a tour for a half or full day, or several days.

Born and raised in North London, I have lived in Windsor for 25 years. I spent much of my working life as a customs officer at Heathrow Airport and in central London to working for the British government, prior to training as a guide.

Married to Laura, I have 4 children, one of whom is a primary or elementary school teacher and the other three are studying at various universities around England.

I have a passion for wildlife, and for many years I helped to run the local Wildlife Watch Group for 7-12 year olds. When not showing clients around London and elsewhere, I delight in walking along the Thames and around Windsor Great Park. I also enjoy visiting the battlefields of France and Belgium, watching old, black and white movies, and researching my family tree, and peoples’ military service.

I obtained an endorsement to guide the 2012 London Olympic Games, and still consider the 2012 Olympics to be the best three weeks I have ever spent in London.

I try to remain cheerful despite following the mixed fortunes of Fulham Football Club.

Memorial At Westminster Abbey For Major John Andre - An Officer, A Gentleman And A Spy

Westminster Abbey has over 3,000 burials and memorials within its precincts, commemorating royalty, poets, scientists, politicians, musicians and more. Booking a Westminster Abbey Tour with a Blue Badge Tourist Guide is a great way to learn about some fascinating features in the church that may go unnoticed by most visitors.