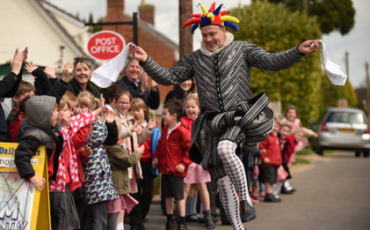 Hallo everyone! My name is Rick<br />
From this Saturday the 2nd of
July, I'm not available until
the 6th, the Wednesday, when I give the Waste Land
tour before lunch and Tate Modern Highlights
after. Thursday is the medic tour
and Friday City churches. Why not book?
You can reserve a place at London Walks.
(http://www.walks.com)

Wednesdays 11am The TS Eliot The Waste Land Centenary Walking Tour. The greatest English language poem of the twentieth century was published in 1922. We visit locations in the City of London which the poet addresses in its 433 lines - St Magnus Martyr, King William Street, St Mary Woolnoth, the Cannon Street Hotel, the public bar in Lower Thames Street and London Bridge. £15 / £10 concs.  Start at Backfriars tube.

'This was an excellent tour [TS Eliot Waste Land Centenary Tour] from a top notch guide. I was only somewhat familiar with the Waste Land poem, having only recently read it in anticipation of this tour that I was attending with my son who is an has studied the poem at Uni and loves it. It’s a credit to Rick that both of us were fascinated and thoroughly enjoyed the tour..'

“Who knew - a few strums on a lute (brilliantly played I might add!) combined with just a few utterances in Rick’s sonorous voice and are transformed into early Elizabethan England!  As he whisks you through 16th century London, Rick brilliantly brings to life, not just Shakespeare himself, but through carefully curated  pithy and engaging anecdotes, the economic, and social context of The Bard’s  whole world. Unique and excellent, thank you Rick!” SG, London

• ST PAULS CATHEDRAL<br />
As a former chorister, I know Sir Christopher Wren's masterpiece better than most and can tell the stories of the choirs, the priests and the state events which the vast dome served with the intimate knowledge of experience. Meet St Paul's tube.

• THE TOWER OF LONDON<br />
Let me show you round the thousand year old castle where the worst excesses of kingly power were exercised, the tortures, the beheadings, the betrayals. Let me show you the diamonds, rubies, emeralds, pearls, sapphires and amethysts the Crown Jewels which someone once tried to steal. I'll introduce you to the Line of Kingsin their armour and the beautiful Norman chapel where William the Conqueror worshipped.

One of the greatest composers in the history of music, Joseph Haydn, lived in London for four years during the 1790s, just as the Napoleonic conflict was beginning to convulse Europe. The King of England George III himself had mused on bringing the Viennese composer here, and several music-loving earls had sent invitations, all of which had gone unanswered.

How many London landmarks and tourist attractions can you name that start with the Letter Y? Blue Badge Tourist Guide Rick Jones continues our Guide London A-Z video series and provides insights on the historical events, famous and not-so-famous landmarks in London starting with the Letter Y.

The Tate Modern in Southwark has become one of the most popular museums in the world since it was converted from its former use as a power station and opened by the Queen in 2000. It is one of four galleries in Britain created from the legacy of the sugar entrepreneur Henry Tate. These are the original Tate Gallery (now Tate Britain), Tate St Ives and Tate Liverpool.