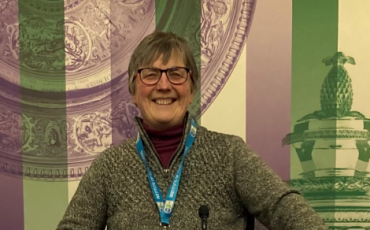 I have been a London Blue Badge guide for 33 years now but there is still so much more to be discovered. I love showing people the city and country I love and enjoy researching for special interest visits too. I studied German at university here in London and fell in love with the city. After several years touring around Europe as a Tour manager I wanted to settle down more so training as a Blue Badge was the obvious next step. I particularly enjoy working with the corporate market and the challenges of the logistics of a big programme. As a keen sportswoman I enjoy working with sporting groups and I am one of the guides conducting the Behind the Scenes Tour at Wimbledon. I have loved singing all my life and performed in many choirs over the years, so love working with choir groups too, who sometimes even let me join in!

Processional Route for the State Opening of Parliament

Each year, Queen Elizabeth II takes part in the State Opening of Parliament. The event "marks the formal start of the parliamentary year and the Queen's Speech sets out the British government’s agenda for the coming session, outlining proposed policies and legislation. It is the only regular occasion when the three constituent parts of Parliament – the Sovereign, the House of Lords, and the House of Commons – meet."

It's that time of year again…A group of eager new faces came to meet us at the Unite offices for the annual New Guides Seminar and Reception on 18 March. This year was different as there is also a Mandarin course running in parallel so we had 40 trainees in total.